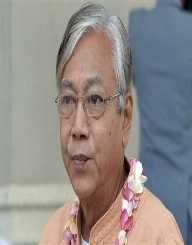 Htin Kyaw was born on July 20, 1946, in Rangoon, Myanmar. He was born to Min Thu Wun and Kyi Kyi. His father was a poet, scholar, and writer. He attended the English Methodist High School where he graduated from in 1962. He later joined the Rangoon Institute of Economics. In 1968, he graduated from the Institute with an M.Econ in statistics. In 1971, he joined the Institute of Computer Science, University of London. In 1974, he joined the Asia Electronics Union where he studied computer. In 1975, he obtained a Master’s Degree in Computer Science.

He later returned to Burma where he ventured into politics. In 1975, he became a Deputy Division Chief at the Ministry of Industry. In 1980, he became a Deputy Director in the Foreign Economic Relations Department in the Ministry of Planning and Treasury. He resigned from the post in 1992. He founded the Daw Khin Kyi Foundation alongside his friend Aung San Suu Kyi. Later Suu Kyi was placed under house arrest, and so he became the link between her and the outside world. In 2000, Kyi was released, and he joined her in traveling to visit the Central Burmese city of Mandalay. Kyi was arrested and put in house arrest again after she argued with a military officer on her way to the visit she had planned.

Kyaw was however sent to Insein prison. He was imprisoned for four and a half months. In 2012, he became a senior executive for Daw Khin Kyi Foundation. In 2016, he became the President of Myanmar on the recommendation of Kyi. He became the first elected civilian to hold the office since 1962. He is also a writer and writes under the pen name ‘Dala Ban.’ He wrote an autobiography of his father titled ‘Min Thu Wun: The Father’s Life: Glimpses of my Father.’

In 1973, Kyaw married Su Su Lwin with whom he has no children. He is currently seventy-one years old.