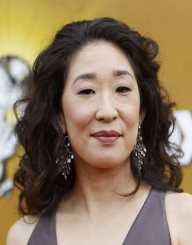 Sandra Oh is best known as a Canadian actress who rose to fame when she appeared as Dr. Cristina Yang in Greys Anatomy television series. She has also made her stance in notable films like Romana and Beezus as well as The Princess Diaries. She also appeared in an HBO series called Arliss. Besides Sandra is a fervent dancer when it comes to an artistic dance called ballet. Read further to understand more about her early and later achievements.

Sandra Oh is typically defined as a dependable, ambitious and sensible lady. Most of all she likes to participate in humanitarian works. She aims to make sure that the whole world is at peace. In short, she carries an idealistic personality that gives her a chance to sacrifice her natures given talent and energy. At times she can be very keen and quite vulnerable, but in the same lane, she hates to go further than her commitments. She likes to discover different things at a go. Yes, she is charitable and watchful but reliable when it comes to her own plans. Sandra prefers an exciting hobby that will allow her to live a stress-free life. She likes to dance just to get rid of boredom. She is more at ease when she is with her close friends and family.

On 20 July 1971, Sandra Miju Oh was born in Ontario, Canada in Nepean (Ottawa) to Young-Nan and Joon-Soo. She has one Brother Ray Oh and sister called Grace Oh. At the age of four, her parents took her to learn ballet lessons with the aim of correcting her inward pointing toes. At ten years old, Sandra appeared in her first play titled The Canada Goose and by 15 she had already appeared in theater and television roles.

Sandra got a scholarship, but he turned it down where she opted to join the National Theatre School in Canada. At this point, she started to disagree with her parents for neglecting his studies. Nan and Joon wanted their children to study and later graduated as prominent doctors and lawyers. Even then, their prayers were answered where Ray turned out to become a professional doctor, and Grace became a lawyer. On the other side, Sandra continues to search for fame in the acting field.

Oh’s success knocked when she won an audition to appear in The Diary of Evelyn Lau. Her outstanding performance garnered her Emmy Award as well as Cannes FIPA Award in 1994.To date; she still envies her first role that cemented her career.

After struggling for few years, Sandra Oh was quite energized for winning a lottery ticket of $5,000.She was as broke as a mouse church, but the lottery ticket changed her mood. After several failures, Oh appeared in an HBO's comedy called Arliss where she garnered a Cable Ace Award.He followed it up with movies like Under the Tuscan Sun, The Red Violin, Six Feet Under and Judging Amy.

Her promising performance in other films allowed Oh to star in a medical drama series called Grey’s Anatomy in 2015.She played as Dr. Cristina Yang, an ambitious intern. The series was applauded by all where she was honored with Screen Actors Guild award.He also won a Golden Globe award on the same.

From 2010 to 2016 Sandra continues to appear in films like Rabbit Hole, The People Speak, The Scarecrow, Tammy, Catfight and the Window Horses. In 2016 she acted as a President in a television animation called Peg and Cat. She then closed it up with a television drama series called American Crime.

Early in 2003, Sandra Oh married Alexander Payne who played in one of her film called Sideways. The movie received five Academy Awards. Oh’s union didn’t fare as expected, so they opted to part ways in 2005. The couple divorced in 2007. As previously mentioned, she neglected her sponsorship where she chose to pursue her acting career. For this reason, Sandra doesn’t have a college degree.