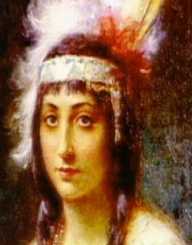 Pocahontas was one of the Native American women that had a proper relationship with the white settlers at James town in Virginia. Also, she was the daughter of the paramount chief Powhatan. The father was the leader of many small tribes in the area who also had their chiefs. During the settlement of the white men in James Town, Pocahontas saved the life of one John Smith. Placed her head on John Smiths before her father could club him dead.

During the year 1613, the whites kidnapped Pocahontas and held her as a hostage. In incarceration, she changed her faith to Christianity. Moreover, she got the chance to go back to her people. However, Pocahontas decided to stay so that she could learn the English language. Also, Pocahontas married a tobacco farmer by the name John Rolfe at 17 years of age. After their marriage, they had a son.

Later, John Rolfe would take her to England to show them the meaning of a reformed savage. She was the center of attraction to many of the people in England. Plus, Pocahontas shocked many in England with her level of elegance. Pocahontas died while still in England and never went back home.  She was only 21 years at the time of her death. Her burial place lies at St. George’s Church Gravesend, England.

According to Native Americans, they could have as many signatures as possible. So, they had times that one could have more than one name at a time. Also, they could choose to have strange names that were known to only a few people. Moreover, the natives could also take names at different ceremonies. So, also Pocahontas had many names. As a young girl, she was called Matoaka. Sometime later she changed to Amonute. Each of the names had different meanings. Then she would get the nickname Pocahontas to mean the playful one. Later when she turned to Christianity, Pocahontas took the title, Rebecca.

In most of the urban legends of the lady Pocahontas, she is one of the Native American Princesses. This notion came from the publication of William Watson Waldron when he published the book Pocahontas, American Princess and Other Poems. However, Pocahontas was not able to inherit the Chiefdom of her father. This was because there were other brothers and sister who were in line to do.

The English Captain led a party of English settlers to occupy James Town. They then built a fort to protect themselves from the Natives. However, one day while John Smith was out of their camp exploring. So, Powhatan's brother caught him and took him, prisoner. John Smith was taken to the Paramount Chief where he was offered an enormous feast.

During these time Pocahontas did not meet with Smith. The dispute between the two side led to the kidnapping of John Smith by the natives. So, the Chief wanted to kill him by bashing his head. However, Pocahontas laid her head against his thereby preventing her father from killing John Smith. So, John wrote to the Queen to praise the heroine nature of Pocahontas when she visited England.

According to some historical facts, Pocahontas became friends with Smith and the people of James Town. So, she would sometimes go to James town and play with the people there. Also, during the hard times, Pocahontas would bring Smith some food to eat. The food was in abundance.

Therefore, it served many of the people in the camp. At some point, the settlers decided to expand their territory. This sparked a conflict with the locals. Later John Smith suffered a severe injury and had to leave for England. The settlers lied to Pocahontas that John was dead. So, she halted her visits to James Town. However, in later years, Pocahontas would learn of his health in England.

During this period there were hostilities between the locals and the settlers who were continually expanding their territory. Therefore, this brought on the war between them. So, one of the immigrants made the plan to kidnap and hold Pocahontas as a hostage. Argall made promises to the local men to help him capture the Paramount Chiefs daughter. He had made the promises of collaboration with the English.

They used the lady as a bargaining chip for the release of all English prisoners in the native's camps. Pocahontas learned the matters in the Bible from one Alexander Whitaker. This was when Pocahontas was still prisoner. Also, during this period Pocahontas changed her faith to Christianity and learned the English language. Moreover, Alexander convinced Pocahontas to get baptized.

Pocahontas may have been married to one of the natives by the name Kocoum. They also had a daughter. Later after her abduction, however, she married one of the settlers by the name John Rolfe. Their marriage bore them a son. Moreover, John Rolfe would take Pocahontas to England to meet the Queen. Also, John had the notion of showing off his civilized native to the English back home.

Pocahontas colors of the wind