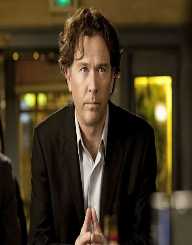 Timothy Tarquin Hutton is an American actor and director. Born on August 16, 1960, he is the Academy Awards’youngest recipient in the Best Supporting Actor category. He won the award at age 20 for his role as Conrad Jarrett in Ordinary People, 1980. Timothy Hutton who made an acting debut with an uncredited role in Never Too Late, 1965, has since appeared in several films and television productions. His works include Taps, 1981, The Falcon and the Snowman, 1985, and The Dark Half in 1993. Timothy Hutton played the role of Archie Goodwin in the A&E drama series, A Nero Wolfe Mystery from 2000 to 2002. He starred in the TNT drama series Leverage as Nathan “Nate” Ford.

Timothy Hutton was born on August 16, 1960, in Malibu, California to actor Jim Hutton and MarylineAdams (née Poole), a teacher. Maryline moved to Boston with young Hutton and older sister Heidi, after her divorce from their father. Hutton was 12 years when they returned to California. In a 1981 interview with Bruce Cook of American Film magazine, Hutton said:"A lot of people think that because my father was an actor, I come from this big show-business background." "But that's not how I grew up at all. My mother took us to Cambridge because she wanted to get her M.A. She wound up teaching in Connecticut, but the way she saw it, after a while, if we all stayed there, my sister and I would just wind up as the proprietors of the local drugstore or something, so that was why she took us to Berkeley– to get us into the world, I guess. Now she's given up teaching, and she's into printing miniature books." Hutton moved in with his father in Los Angeles in 1976 at age 16.

Timothy Hutton attended Fairfax High School. He played as Nathan Detroit in a school production of Guys and Dolls, during which he realized he wanted to become an actor. Timothy Hutton gained the support of his parents and therefore took acting more seriously. His father died on June 2, 1979, from liver cancer at age 45.

Timothy Hutton started his career playing some minor and uncredited roles in several films and television movies. In 1979, he appeared in the ABC television film Friendly Fire and followed it with a role as the son of Donna Reed in the NBC TV film, The Best Place to Be. In 1980, Timothy Hutton appeared in the CBS made for TV films “Young Love, First Love,” and “Father Figure.” Timothy Hutton made a feature film debut playing the role of Conrad Jarrett in Ordinary People in 1980. His performance won him the Golden Globe for Best Supporting Actor and an Academy Award for Best Supporting Actor.

Timothy Hutton also won the Golden Globe Award for New Star of the Year in a Motion Picture-Male. His next role was in the ABC television film A Long Way Home co-starring Brenda Vaccaro. His other works include Taps, which was critically acclaimed and commercially successful, and The Falcon and the Snowman in 1985.

Timothy Hutton made a Broadway debut in the A.R. Gurney play Love Letters opposite Elizabeth McGovern in 1989. This was followed by Craig Lucas comedy Prelude to a Kiss, starring Mary-Louise Parker and Barnard Hughes.

Timothy Hutton has appeared in films including Everybody’s All-American alongside French Kiss, Dennis Quid, Jessica Lange, Kevin Kline and Meg Ryan, and in 1996 starred in Beautiful Girls opposite Natalie Portman. Timothy Hutton also played several television roles including in the A&E television series A Nero Wolfe Mystery from 2001 to 2002 and in the miniseries WW3, 2001, Kidnapped, 2006, and in Leverage as Nate Ford from 2008 to 2012. His most recent television work is in the ABC crime drama American Crime opposite Felicity Huffman.

Timothy Hutton is among the owners of the restaurant and bar P.J. Clarke’s, in New York City. He served as the president of Players, a New York actors' club in 2003. Timothy Hutton however, resigned the position in 2008 for work reasons. Hutton has also done some directing works including theCars’ music video for the hit single Drive, 1984.  Timothy Hutton also directed the music video for "The House Rules" by Christian Kane. Timothy Hutton directed some episodes in the television series, A Nero Wolfe Mystery Digging to China, 1998,

Timothy Hutton has married twice first to actress Debra Winger in 1986. They have a son Noah. The couple divorced in 1990. He then dated Uma Thurman and Angelina Jolie. He married Aurore Giscard d'Estaing, a niece of former French president Valery Giscard d’Estaing in 2000. They have a son Milo born in 2001.

According to a report by US Weekly in July 2009, Timothy Hutton and Aurore had separated. In 2005, he became a Freemason at Herder Lodge No. 698 in New York City.