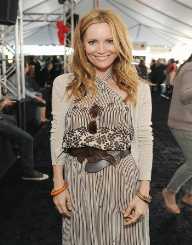 Leslie Mann is a successful actress in the comedic category of movies. She has devoted her life to acting and her family.

On March 26, 1972, Leslie J. Mann was born to Janet Mann. Janet raised Leslie as a single mother because Leslie’s father left before she was born. So she never knew her father. Janet was living in San Francisco, California when Leslie was born. She worked as a real estate agent to make ends meet. They later moved to New Port Beach.

Over the years her mother had married three different times, and Leslie ended up with two siblings and three older stepbrothers between her mother’s various marriages.

Leslie was a shy girl when she was younger. Then when she hit her teen years, she became interested in acting. She did go to college for Communications but didn’t graduate. She dropped out to join the Joanne Baron Studio so she could study acting. Later, she studied with the groundings, the improv troupe.

Leslie Mann lives in Los Angeles with her husband and daughters where they are happy to be.

In 1995, while auditioning for the Cable Guy movie, she met the director Judd Apatow. He ran Jim Carey’s lines during her audition. They fell in love over the next couple years. They were married in 1997. Over the years since they had two daughters, Maude and Iris.

Leslie always tries to keep Maude and Iris from feeling neglected or that her career is still first. This is just not true. She ever wants them to feel like they come early in her life. This is how it is. She doesn't like going far away for movie shoots. She tries to keep the family close when she does a movie. She dosesn’t like leaving them with babysitters all the time.

Although Leslie Mann is allergic to animals, she has three dogs at home. She loves them very much, but she ends up with itchy watery eyes.

When she met her husband, she said that it wasn't loved at first sight for her. She thought Ben Stiller, the director of the cable guy that she was auditioning for, was cute. But for him, he commented that there goes my future wife.

She says that being a mom is fun and rewarding but it is also hard work and when she goes to work it is like being on holiday.

Leslie Mann is known to have acting roles in romantic comedies during her career. She never really said she wanted to do to one specific type of movie in her life like drama or comedy or horror. It just ended up that most of her films have been comedies. “The Cable Guy” with Jim Carrey in 1995 was her first movie role. Up until then, she had small rolls of commercials. Then in 1999, she stared in “Big Daddy” with Adam Sandler.

In 2007, Leslie starred in the movie “Knocked up” with actor Paul Rudd. Judd wrote and directed the film. This was Leslie’s biggest hit of her career. The movie made more than two hundred million dollars. Their two daughters played in the movie with her.

“This is 40” is the sequel to “Knocked Up” and she and her daughters played in it again in 2012. These two movies directed by Judd were not his only movies that she acted in. She was also in “the 40-year-old virgin” with Steve Carell in 2005, “funny people” with Adam Sandler in 2009 and the short-lived television series “Freaks and Geeks” in 2000, not to mention “Big Daddy” in 1995 with Adam Sandler.

Although Leslie Mann has never won an award for her acting, she was nominated for the best actress in the comedy at the critics choice movie awards for ‘This is 40’. Leslie has also done some active voice acting in her career. She was in the movies Rio, Mr. Peabody & Sherman, Rio 2, the animated FOX television series Allen Gregory, and the film ParaNorman.

During the 2017 Oscars, Leslie was one of the stars on the worst dressed list with a full yellow dress. She was compared with Belle from beauty and the beast. Leslie always experiences stage fright every time she goes on a talk show. She tried going to a hypnotist once to get over it. She was told to stand in front of a mirror in a powerful pose and say things like “you are strong.”

Leslie also admits that George Clooney makes her feel starstruck when he is around. She said that maybe if she talked to him more, she could get over it. She says that he is so smart that he just intimidates her.

Leslie Mann and Judd are longtime supporters of the nonprofit organization “826LA”. The team focuses on encouraging writing skills of disadvantaged youth. They are also involved with UCLA Rape Treatment Center's Stuart House. This group serves the needs of sexually abused children and their families.

The Bogart pediatric cancer research program honored the couple in 2012 for their philanthropic contributions with the 2012 “Children’s Choice Award” for their work with children and families who are dealing with pediatric cancer.

Over her acting career, Leslie Mann has amassed a net worth of 15 million dollars. She has been in 32 movies, and eight tv shows through this time. And a handful of commercials. All since she was 18 years old. She has never regretted her decision to become an actress. She loves it and has the time of her life.

Leslie gets together with her friends for a girls night out about every six weeks or so. They read astrology books, drink wine and talk about everything for the few hours they are together. Leslie admits that her marriage isn’t perfect by a long shot, but they are pleased with their lives as a couple and as a family as a whole.

Leslie Mann is proof that you can follow your dreams and still have a happy family life at the same time. So if you want to have the same thing you can. Follow those goals and have that family and work hard to keep everything in harmony just as she did and continued to do every day of her life. They have a very close family, and she admits that her children are her boss and she says that she is a slave to her daughters.