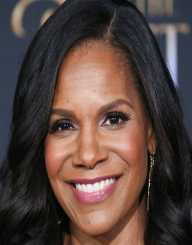 Audra Ann McDonald was born 3rd July 1970, to Stanley and Anna McDonald. She was born in West Berlin, Germany, and had a younger sister. Her father was a high school principal, and at the time of Audra McDonald's birth was stationed with the U.S. Army. Her mother was a university administrator.

Audra McDonald grew up in California, in a town called Fresno. She went to Theodore Roosevelt High School and graduated from the School of the Arts program run by the school. She joined a junior acting company called the Good Company Players, which Audra McDonald was where she began her career.

Audra McDonald then studied at the Juilliard School in classical voice and graduated in 1993.

Audra McDonald is best known for her roles in Broadway productions but is also an accomplished actor in film and television, and a very talented singer. She has won six Tony Awards, making her the only actor to do so.

Audra McDonald has performed in various operas, done concert tours, and recorded her music. Her opera performances include La VoixHumaine in 2006, which was her debut, Rise and Fall of the City of Mahagonny in 2007, and A Moon for the Misbegotten in 2015. She undertook a major concert tour from March 2013 to October 2015. She had a break between March and December 2014 to perform in other work but then resumed her tour. She performed 60 concerts in all. Audra McDonald continues to perform regularly in many other concerts as well and has performed with such well-known entities as the New York Philharmonic Orchestra, and the Mormon Tabernacle Choir.

Audra McDonald is signed with Nonesuch Records and has recorded five albums to date. Her first was titled Way Back to Paradise and was released in 1998. Her next three albums were released in 2000, 2002 and 2006 respectively. It would be seven years later, in 2013, when her next album, Go Back Home, was released. As well as her solo albums, Audra McDonald has recorded 13 cast recordings from productions she appeared in and featured on 15 albums with other artists. Audra McDonald has also released video recordings and audiobook recordings.

Audra McDonald has appeared in many television series and movies, 27 in all. Her appearances include four seasons with Private Practice, and the announcement was recently made that she will be joining the main cast of The Good Fight for their second season which will air in 2018.

Some of Audra McDonald's other television appearances include shows such as Law & Order, Mister Stirling, and Grey’s Anatomy.

As would be expected for someone so talented, Audra McDonald has been nominated for 52 awards across stage and television.

Of the 52 nominations, she has won 27. These include six Tony Awards, one Emmy Award, two Grammy Awards, and five Drama Desk Awards.

Audra McDonald was also awarded the National Medal of Arts in 2015 by the U.S. President, Barack Obama.

In 2000, Audra McDonald married Peter Donovan, a musician. They had a daughter, Zoe, together, but later divorced in 2009.

Audra McDonald married for a second time in 2012. Her second husband was Will Swenson. They had a daughter, Sally, in 2016.