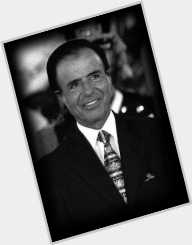 Carlos Saúl Menem was born on July 2nd, in 1930. He is famous for being an Argentine politician who took office as its president for two terms. He first took office in 1989 and ended his tenure in 1999. While serving as the president, he was credited with bringing profound changes more so in strengthening the economy. During his term in office, he also fought economic recession as well as inflation that had a negative influence on the Argentine economy. Since 2005, Menem has been the senator for his hometown province, La Rioja.

Carlos Saúl Menem was born on July 2nd, 1930. His place of birth was in Anillaco in Argentina. He was the son of Mohibe Akil and Saúl Menem. Both of his parents had emigrated from Syria. Menem went for his early education in La Rioja where he also completed his high school. While at the university, he was an avid sportsman and was part of the basketball team. As a basketball player, he accompanied his team during their visit to President Juan Perón and his spouse, Eva Perón. This had weighty influence in his decision to become a Peronist. Subsequently, he enrolled at the National University of Córdoba where he studied law. He graduated from the university in 1955.

During the same year of his graduation, Juan Perón was overthrown from office. This led to the imprisonment of Menem for a short period. After this, he joined the Justicialist Party. In 1973, Carlos Menem took over as the governor of La Rioja. After a short period of serving as the governor, he was discharged from office in 1976. This was as a result of Argentine coup d'état which also overthrew Isabel Martínez de Perón from office. Menem was also faced with allegations that he was a corrupt individual that maintained connections with guerillas.

Carlos Menem was put behind bars in 1973 and spent five years in jail. During this time in prison, his mother passed away. Menem had requested to attend his mother’s funeral, but his requests were denied. Upon his release on July 29th, 1978, he went to live in Mar del Plata.

In 1983, the military rule that had been running the nation came to an end. As a result, Raúl Alfonsín took charge as the Argentine president. Menem also ran for the governor’s position for the second time. He emerged victorious defeating his opponents by a large margin. Due to increased industrial growth that was experienced in his second term, he was elected governor for the third term in 1987.

Carlos Saúl Menem took over as the president of Argentina in 1989. While taking over as the head of state, the nation was undergoing difficult moments with regards to inflation and economic recession. He began his transformations by avoiding conventional Peronists’ policies and adopting Washington Consensus which aimed at reducing government expenditure. In addition to this, he also focused on pushing for free trade. His early efforts also saw privatization of some enterprises including the airline and the telephone industry. His policies and changes he adopted led to notable improvements in the economy.

To deal with inflation, the Argentinean Peso’s value was raised. The exchange rate with a US dollar was made to one to one. This led to the replacement of the Austral currency. Nonetheless, this strategy worked only during the initial periods of its adoption.

Following his efforts in saving the country’s economy, Carlos Menem was elected back to the office in 1995. His main goal during this term was to ensure that international relations were enhanced. In 1998, he made his first trip to Britain. This brought huge attention bearing in mind that the last visit by an Argentine leader was back in 1982.

His second presidential term was however not successful as it was weighed down by corruption charges and internal conflicts. Fernando de la Rúa took office as the next president in 1999.

A few years after his tenure ended in 1999, in 2001, Carlos Menem faced corruption charges of dealing with weapons. Consequently, he was placed under house arrest for five months.

In 1966, Carlos Menem wedded Zulema Fátima Yoma. Together they were blessed with two children. However, in 1991, the couple went separate ways. Four years later, his son called Carlos Saúl Facundo Menem died. He had been involved in a helicopter accident.

Carlos Menem also had an affair with Martha Meza, who was a deputy. Their son, Carlos Nair Menem was born in 1981. Later, in 2001, he wedded for the second time to Cecilia Bolocco, a former Miss Universe. They also had a son in their marriage. This marriage was also not successful, and it ended in divorce in 2011.