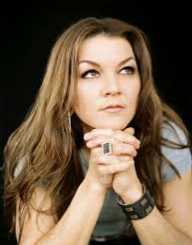 As a child, Wilson was raised by a single mother. The family was poor, and they lived in a trailer park. Wilson later dropped out of high school when she was only in ninth grade. Gretchen Wilson then joined the workforce to help to support her family. She worked in restaurants and would sing for tips.

In 1996, Wilson left her home and moved to Nashville to start her professional music career. However, she did not accomplish that goal right away. She spent much of her early years in Nashville's working in restaurants and bars as she had done at home. Luckily for Gretchen Wilson, it was while working as a singer in a bar that she was noticed by members of Big & Rich, who immediately knew that she had what it took to become a famous singer.

It was not until 2003 that Wilson was signed on with a recording company (Sony Music Nashville). Soon after she signed on with the record company, she produced her first album:

Here for the Party. One song on this album “Redneck Woman” would go on to be the most famous and catchy tune on the album. It could be argued that this is still her most famous song to date. With help from this song and the other great songs on the album, Here for the Party sold like crazy, soon becoming certified as quadruple platinum. This album also earned gold status in Australia and Canada.

However, it was the least popular of her albums up to this point, as it did not reach platinum status. It was in the top ten list in Canada when it was released, but it barely made it in the top one hundred in Australia. Her next album, I Got Your Country Right Here, was released in 2010. This album did worse than her other albums. As the 2010’s went on, her albums became progressively less popular.

Gretchen Wilson released three other albums in the 2010’s so far: Right on Time, Under the Covers, and Ready to Get Rowdy. Each album sold worse than the one before. During this decade she also produced a Christmas album (Christmas in My Heart) and a live album (Still Here for the Party).  She also released three compilation albums during this decade: Greatest Hits, Playlist: The Very Best of Gretchen Wilson, and Snapshot.

As of 2017, Gretchen Wilson is still active in her music career.

All of Wilson’s awards are for her musical talents. Some of her most impressive awards are listed below.

Country Music Association Award for Female Vocalist of the Year (2005)

Gretchen Wilson married Larry Rolens. However, this marriage ended in divorce. She has one daughter, Gracie Penner, with her ex-boyfriend, Michael Penner.