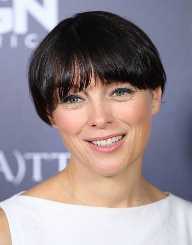 English actress Olivia Williams was born on the 26 July 1968 in London, England.

Olivia Williams graduated from South Hampstead High School in London. She then enrolled at Newnham College, Cambridge and did a degree in English literature. After obtaining her degree, she was accepted into the Bristol Old Vic Theatre School where she studied drama for two years. Once she had qualified, she joined the Royal Shakespeare Company for three years.

During her time with the Royal Shakespeare Company, Olivia Williams starred alongside Ian McKellen in Richard III. She then made her television debut in Emma (1996) playing the lead role in the BBC adaptation of the Jane Austen novel. Her first feature film was The Postman.

She was in a long-term relationship with actor Jonathan Cake before marrying Rhashan Stone in 2003. She has two daughters.