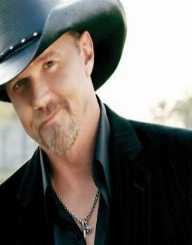 Born on January 13, 1962, Tracey Darrell Adkins is a multiple award-winning American singer and actor. Best known as Trace Adkins, he broke into the world of country music with the release of the album Dreaming Out Loud in 1995 under the Capitol Records label. The rest is just a history as he has since released hit albums and tracks which got listed on the Billboard chart of country music. Some of his famous songs are You’re Gonna Miss This, Ladies Love Country Boys, I Left Something Turned on at Home among several others.

Aside music, Adkins also proved his versatility in the entertainment industry with his appearances on televisions and reality shows and movies like Square to Dance, An American Carol and King of the Hill among others.

Trace Adkins was born to Aaron Doyle Adkins a mill worker and Peggy Carraway in Sarepta Webster Parish in northwestern Louisiana. He had two other siblings, Clay Adkins and Scott Adkins, who are both deceased. He spent his childhood days in Sarepta where he had his early and high school education. Coming from a family with some form of musical background as his maternal uncle was a Christian musician, Adkins had an interest in music at a very young age. His father having noticed this gave him some lessons in how to play the guitar.

Trace Adkins joined the New Commitments Gospel Music group during his high school education at the Sarepta Senior High School. He then got enrolled in the Louisiana Tech University in Ruston but dropped up to take on some jobs.

After dropping out of the university, Trace Adkins had a job on an oil rig and also as a pharmacy technician, but he accidentally cut off one finger whiles trying to open a bucket with a knife.  Having a love for music and playing the guitar he asked his doctor to join the finger to enable him to play the guitar and subsequently switched to music. Coming back to his first love “Music” was not a big deal at all. As the saying goes “never despise small beginning,” Adkins started his career playing guitar in bars in the 1990s. He was used to playing at the honky tong bars before moving to Nashville.

Luck finally found Adkins when he moved to Nashville, Tennessee to continue his usual performances at bars. There, he met Rhonda Forlaw, an Executive at Arista Records Nashville who introduced him to other players in the music industry. After some years, Adkins had his first record signing when Scott Hendrick of Capital Nashville identifies him during a performance at Tillie and Lucy bar.

Trace Adkins first single There’s a Girl in Texas worked all the magic as it shot him to stardom after its released in 1996. The track made it to the Top 20 on the Billboard Hot Country Singles & Track charts. The single paved the way for the release of his debut album Dreamin’ Out Loud which was blessed with many hit songs that same year. With the kind of success chalked by the first album, Adkins went on the release his second album Big Time. Unfortunately, the album didn’t make it as the first one. However, a song on the album The Rest of Mine made it onto the Top 5.

Trace Adkins subsequently released albums like More in 1999, Chrome in 2001, The Greatest Hit collection and Comin’ on Strong in 2003 and Song About Me in 2004. That same year, Adkins made a giant stride with the release of Honky Tonk Badonkadonk. The album made it to the top 40 of the Billboard Hot 100. He then released his last album Dangerous Man, 2006 with the lead track Swing.

Adkins after the last album decided to release on singles tracks. Ladies Love Country Boys a single became a hit and charted number one making it his second single track to reach that status.  He also had singles like, I Got My Game On, You’re Gonna Miss This which was also a hit song 2007, Muddy Water, Marry for Money, All I Ask For Anymore and

Trace Adkins and Capital Nashville long love story finally ended when he moved from the record label to Show Dog-Universal Music in 2010. There, he released the single This Ain’t Love Song which was also the lead track for his studio album Cowboy’s Back In Town. The album was charted 54 two days after its release on May 17, 2010. Adkins continued to make his presence felt on the Billboard with the release of Just Fishin which made it to number six on the Billboard. The video of the song featured his youngest daughter Trinity. In 2013, he released Love Will and his first Christmas album The King’s Gift then parted ways with his record label Show Dog-Universal Music.

Trace Adkins is currently signed to the Broken Bow Records’ Wheelhouse Records, being the first artist to be signed to the label in 2015. He has since released singles like Jesus is Jones in 2016 and Lit also in 2016.

Adkins made an acting debut in 1987 with the film Square Dance. One of his popular television series is Yes, Dear where he acted as a prison convict in episode 4. He has starred in other movies like An American Carol, Lifted, The Lincoln Lawyer, Mom’s Night Out, Traded, etc.

Trace Adkins throughout his music, and acting career has been nominated and won several awards. In 1996, he won the ACM Top New Male Vocalist award and also CMT Male Video of the year for the song I Got My Game On. He was nominated for the 2008 Grammy Awards in the categories Best Male Country Vocal Performance and Best Country Song but lost out to other another contender. With hard work and dedication to his music career, he won ACM  Single of the Year in 2009 with You’re Gonna Miss This and ACM Vocal Event of the Year - "Hillbilly Bone" with Blake Shelton. His last award was in 2010 when he picked the CMT Award for Collaborative Video of the Year - "Hillbilly Bone" with Blake Shelton.

Trace Adkins has been married twice, first to Barbara Lewis, with whom he had two children, Tarah and Sarah. After their divorce, he got married to Rhonda Forlaw and currently has three children with her, Mackenzie, Brianna, and Trinity. The two filed for divorce in 2015, but the judgement is still pending.

In 1975, Trace Adkins narrowly escaped death when his pickup truck collided with a school bus. He had his part of his nose torn off, and some ribs were broken after the accident and got hospitalised for some time. During his days at the Louisiana Tech University, his knee injury prevented him from playing like the offensive lineman for the school team.

Adkins accidentally cut one of his fingers when he was using a knife to open a bucket. Also in 1994, he got shot by his ex-wife in a near fatal incident but chose not to press charges against her. In 2001, he had a tractor accident which caused a temporary cancellation of his tour.