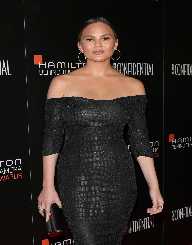 American model Chrissy Teigen was born on the 30 November 1985 in Delta, Utah. She is of mixed Norwegian-Thai parentage. During her upbringing, the family lived in Hawaii, Idaho and Washington State before moving to Huntington Beach, California.

Chrissy Teigen was scouted while working in a surf shop in California. Her model agency is IMG Models, New York.

Chrissy Teigen has since appeared in many advertising campaigns including Nike, UGG Australia, Gillette Venus, Billabong, Beach Bunny Swimwear and Gap Factory. Television appearances include America's Next Top Model, Watch What Happens Next and Model Employee. In 2010 she was made Rookie of the Year and appeared in Sports Illustrated’s 2010 swimsuit issue. After that, Chrissy Teigen was in five following Sports Illustrated Swimsuit issues (2011-2014). In 2014 she was one of three models on the cover of Sports Illustrated's 50th Anniversary Swimsuit issue. Teigen has appeared on many covers including Cosmopolitan magazine, Italian Vogue, and Galore.

She is also a food writer, runs a food blog and is the author of Cravings (2016).

Chrissy Teigen married singer John Legend in 2013. They have one child, a daughter Luna.