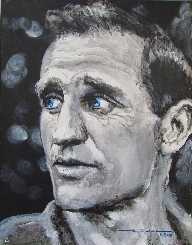 Beat generation figure Neal Leon Cassady was born on the 8 February 1926 in Salt Lake City in Utah to Neal Marshall Cassady and Maude Jean Scheuer. After the death of his mother in 1936, Cassady was raised by his father in Denver, Colorado. His father had issues with alcohol abuse, and Cassady spent time in reform school as a youth. He was arrested for shoplifting, car theft and fencing stolen property. In his mid-teens, Cassady met Justin W. Brierly, a school teacher who recognised his intelligence and took an interest in him.

Encouraged by Brierly who acted as his mentor, Neal Cassady enrolled at East High School.

Neal Cassady continued with petty crime, and in June 1944, he was arrested for being in possession of stolen goods and sent to prison. He spent eleven months in jail, and during that time Brierly kept in touch with him. He met the Beat poets Jack Kerouac and Allan Ginsberg in New York City in December 1946.

Neal Cassady visited a friend, Hal Chase, who was studying at Columbia University in New York in December 1946. It was during this time that he first met Alan Ginsberg and Jack Kerouac. Ginsberg fell in love with Cassady, and the two men had an intermittent relationship which lasted 20 years.  Cassady would later feature in Ginsberg’s poetry. Around this time, aware of his sketchy education, Cassady asked Kerouac to teach him the art of writing fiction.

Cassady made various road trips with Kerouac and Ginsberg over the years.  Kerouac based On The Road on their adventures using Cassady’s personality and voice as the inspiration for Dean Moriarty. He also used Cassady for inspiration in later work. Cassady was arrested for marijuana possession in 1958, was charged and sentenced to two years in San Quentin State Prison in California. He met Ken Kesey in 1962 and became part of the Merry Pranksters, who promoted the use of psychedelic drugs.

In 1963, Robinson divorced Neal Cassady, and he moved into an apartment with Ginsberg and Charles Plymell in San Francisco. Kesey based the main character, Randle Patrick McMurphy, in One Flew Over the Cuckoo’s Nest (1962) on Kerouac’s fictionalised Cassady. He also wrote a short story based on Cassady’s death The Day After Superman Died (1979).

Neal Cassady travelled across America by bus from San Franciso to New York in 1964 with Kesey and the Merry Pranksters, inspired Tom Wolfe’s book: The Electric Kool-Acid Test (1968). Cassady continued his wanderings during the mid to late 1960s travelling between California, Colorado, New Tork, and México. He was in México in February 1968 when he was found unconscious alongside a railroad track, having passed out. He was in a coma when discovered and died in hospital on the 4 February 1968. The coroner was unable to give a definitive decision but said that his system was congested and that drugs had been involved.

Neal Cassady first wife was LuAnne Henderson who he married in October 1945. She was 16 at the time, and after he met Carolyn Robinson in 1947, the marriage was annulled. Cassady then married Robinson (1948).  The couple had three children and lived in Monte Sereno in California. They built a house from money received from the Southern Pacific Railroad in settlement relating to a work accident.

During his marriage to Robinson, Cassady bigamously married Diane Hanson and had a child with her, Curtin Hansen. Robinson had an affair with Jack Kerouac while married to Cassady. Robinson wrote about her life with Cassady, publishing Off the Road: Twenty Years with Cassady, Kerouac, and Ginsberg (1990). Cassady had five children, three with Robinson:  Robert William Hyatt (1945), Cathleen Joanne Cassady (1948), Jami Cassady Ratto (1949), Curtis Hansen (1950-2014) and John Allen Cassady (1951).

Neal Cassady left an unfinished manuscript. The First Third, which was published after his death.