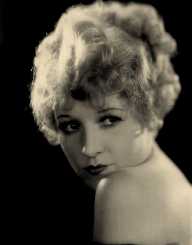 Betty Compson was a household name in America before 1940. And although her popularity declined in her later years, she remained an acclaimed actress with over four decades of successful films. Betty Compson remarkable acting skills were coupled with her good looks and a charming personality.

Betty Compson was born as Eleanor Luicime Compson on March 19, 1897. Her birthplace was Utah. Her father was a mining engineer who died early in her childhood, leaving the mother-daughter pair to fend for themselves. Betty Compson gave up school and accompanied her mother as a pianist. Young and beautiful in her teenage years, she put up an act known as The Vanguard Violinist with her mother, which was quite well received.

While performing with her mother at a show, she was spotted by Al Christie, who offered her a film role and suggested her to change her name to Betty. That was how she forayed into the world of Silent films.

Betty Compson had an accomplished film career. She had huge success in silent films and later on with the talkies. Towards the end of her career, she became a producer.

After Al Christie cast Compson in her first Silent film in 1915, she began receiving regular work. Her acting skills were widely praised, and she made a name for herself in the comedy genre. As a newcomer to the industry, she soon began to leave a mark and appeared in 25 films in the year 1916.

The movie The Miracle Man came in 1919 and established Compson as a superstar. As a famed actress of the 1920s, she received regular work in some of the most successful films of the period. This includes The Docks of New York, for which she is most widely known. Another famous movie was The Gabbo (1929).

Silent movies soon gave way to the talkies, and while many other actresses struggled, Compson made the transition quite smoothly. She gave many successful hits like Isle of Escape, Those Who Dance, and Midnight Mysteries in 1930.

Her success continued in 1931 with movies like The Lady Refuses, and Three Who Loved. She also began to get a variety of genres other than comedy and proved her versatility with every role.

Betty Compson popularity began to fade after the 1930s, and she became a producer. Her first movie as a producer was Prisoners of Love in which she also appeared as an actor.

With her husband, she also launched a business named ‘Ashtrays Unlimited.’

Betty Compson did not win any major award. However, she was nominated for the Academy Award for Best Actress in 1928. She also has a star on Hollywood Walk of Fame at 1751, Vines Street.

Betty Compson had three marriages. Her first marriage to Director James Cruze was an unhappy one and lasted six years before they separated in 1930. In 1933, Betty Compson married agent-producer Irving Weinberg. They divorced in 1937.

Betty Compson finally met her soulmate in Boxer Silvius Jack Gall. They married in 1944 and remained together till his death in 1962. Compson had no children.