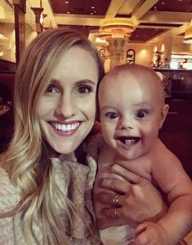 Ellie Mecham was born on April 19, 1991, in Utah, USA. Her parents are Chad and Jennifer Griffiths. She also has four siblings: Beau, Bonnie, Julie, and Ruby.

Ellie Mecham’s first YouTube channel was called Stylebyellie. However, the name has been changed since then. At first, she used this channel to share beauty tips and tricks as well as having make-up tutorial videos. The main audience for her videos were teenage girls and young women looking for ways to up their style.

As she aged, Ellie Mecham began posting mostly vlogs, showing snippets of her life. Many of her videos include her husband, Jared, and sometimes their children. The channel she uses with her husband is called Ellie and Jared. The couple started out slowly, posting a couple of videos a month, but they later started posting vlogs almost every day. These blogs are popular with many young women, as they revolved around the Mecham family’s life. Early on in their marriage, the couple was having trouble getting pregnant. The couple chronicled their struggle with infertility, and later their joy about becoming pregnant and starting a family together.

Ellie Mecham also has her channel, which she does not share with her husband, even though he appears in many videos. This channel is simply called Ellie Mecham. On this channel, he vlogs about the daily life of a young mother. She shows off her children, talks about her pregnancies, and even has some cooking videos.

Ellie Mecham is also a member of the site, Pinterest, which is popular among mothers both young and old. She does post some pictures of her children on this site, but not much. She mostly posts pictures of products that she loves, tricks and tips for mothers, and recipe ideas.

When Ellie Mecham is not on the computer, she is busy spending time with her husband and her two sons. She loves to spend time in nature and meeting new animals. She hopes to have pets one day. She wants to have chickens when her family has a bigger house, as she had them as pets when she was a child.

Ellie Mecham married Ellie Mecham when after she had graduated from high school. She was only 18 years old at the time, but the couple was very much in love. Being a highly religious couple (Catholic), Ellie loved the idea of having children. However, the couple struggled with infertility for years. Luckily, the couple now has two sons together: Calvin and Jackson. It is likely that this couple will continue to try to have more children to grow their loving family.

Ellie Mecham is also extremely close to her parents and siblings. They can often be seen in her vlogs. She argues with them at times, but they can always settle their differences. Her big family makes sure that she and her boys are never alone. The tight-knit group gives her and her family all of the support they could ever need.