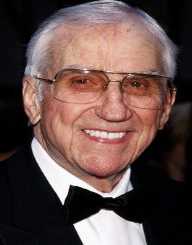 Ed McMahon was born on March 6th, in 1923. He was famous for being a TV host, comedian, singer and an actor. He garnered high acclaim after partnering with Johnny Carson to host the show Who Do You Trust? from 1957 to 1962. He later went on to make his mark in the TV industry while featuring as a sidekick host in the show called The Tonight Show. McMahon also earned his fame after hosting Star Search for about a decade.

Ed McMahon was born on March 6th, in 1923. His birthplace was in Detroit, Michigan. His father, Edward Leo Peter McMahon Sr. worked as an entertainer. On the other hand, his mother Eleanor McMahon was a homemaker.

Prior to offering his services in the army, McMahon had to enroll with the Boston College where he studied in 1940 and 1941. After completing his college education, he was enlisted in the United States Marine Corps. This gave him the opportunity to serve his country during the World War II.

Later, when the World War II came to an end, he went back to school and joined The Catholic University of America. Here, he took classes in drama and speech. He earned his degree in 1949.

Shortly after completing his education, McMahon joined forces for the first time with Johnny Carson to host the game show on ABC called Who Do You Trust? This show began airing in 1957 and that they worked together until 1962.

After their first stint together, the two again hosted another show, this time on NBC. This show was called The Tonight Show Starring Johnny Carson. The show began airing on October 1st, 1962. For a period of about three decades, McMahon was the individual that introduced his partner Johnny with the famous slogan - "Heeere's Johnny!"

Following the fame that McMahon had garnered, he went ahead to host the show Star Search. This show began airing in 1983. He played his role in the show for about a decade before it came to an end in 1995.

In July 1945, McMahon tied the knot with Alyce Ferrill. During this time, McMahon was serving in the military. Together, the pair welcomed four children in their marriage. However, their marriage ended in a divorce in 1974. Two years later, he married Victoria Valentine. The two had no children of their own. Nonetheless, they adopted a daughter together. In 1989, they went separate ways. His last marriage was to Pam McMahon. The two wedded in 1992.