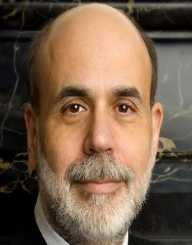 He also served as a professor at Princeton University and chairperson in the department of economics from 1996 to 2002. He also served in President George W. Bush’s government as chairman of the Council of Economic Advisers. He later replaced Alan Greenspan as chairperson of the United States Federal Reserve and served for two terms until January 31, 2014.

Ben Bernanke was born Ben Shalom Bernanke to pharmacist Philip and elementary school teacher Edna in Augusta, Georgia, the U.S. He was born on December 13, 1953, as the first born child in a family of three. He grew up in East Jefferson Street in Dillon, South Carolina. He went to East Elementary, J.V. Martin Junior High and later to Dillon High School.

Ben Bernanke began his career as an instructor at the Stanford Graduate School of Business from 1979 until 1985. He also taught at the New York University and later at Princeton University in the Department of Economics. He served as chairperson at Princeton from 1996 to 2002 before going on public leave and then resigning on July 1, 2005. He was also a member of the Board of Governors of the Federal Reserve System for three years.

In 2005, President George W. Bush nominated him to the position of chairperson of the Council of Economic Advisers. He later replaced Alan Greenspan as chairman of the Federal Reserve Board of Governors where he served for four terms. In his tenure as chairman of the Federal Reserve, he was able to set up monetary policies that helped in improving the financial stability of the United States, especially amidst the impending economic crisis.

Ben Bernanke began his second term in 2010 when President Obama nominated him to take up the same position. He served for four years and was succeeded by Janet Yellen in 2014 who had served as the vice chairperson of the Federal Reserve. After his terms at the Federal Reserve, he has since become an active member of the Montgomery Township Board of Education.

He also became a fellow in residence with the economic studies program at the Brookings Institute from February 2014. He published his book titled ‘The Courage to Act’ in 2015 in which he stated that he was not a Republican anymore and considered himself independent.

Ben Bernanke has received several honors and awards including Fellow of the Econometric Society (1997), Fellow of the American Academy of Arts and Sciences (2001), Order of the Palmetto (2006), Distinguished Leadership in Government Award, Columbia Business School (2008). The South Carolina Department of Transportation (SCDOT) Commission approved a resolution on February 21, 2009, to name Exit 190 along Interstate Highway 95 in Dillon County the Ben Bernanke Interchange and he was named the TIME magazine person of the year in 2009.

Ben Bernanke married Anna Friedmann a graduate of Wellesley College and a schoolteacher. Together the couple has two children. He is currently sixty four years old.