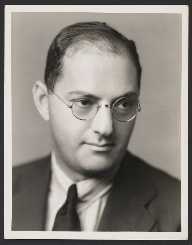 Ira Gershwin was born on December 6th, in 1896. He was a talented lyricist. He earned his fame during the 20th century for composing remarkable songs alongside his brother called George Gershwin. Ira Gershwin also wrote over 12 Broadway shows.

Ira Gershwin was born on December 6th, in 1896. He was born in New York. He was the first born son to Rose and Morris Gershovitz. Gershwin had three other siblings.

Ira Gershwin went for his high school education at Townsend Harris High School. Here, he crossed paths with Yip Harburg, an individual that would later become his longtime friend. Similarly, Gershwin also enrolled with City College of New York. However, he did not complete his classes here as he dropped out.

Ira Gershwin's younger brother called George began compositions when he was 18. At the time, Gershwin worked as a cashier. His interest in music came in 1921. As a result, he landed on a deal with Alex Aarons where he would hone his skills by writing songs for his show called Two Little Girls in Blue. Gershwin and his younger brother collaborated to compose A Dangerous Maid. This was the first major hit that brought them to the limelight.

After that, they enjoyed their first Broadway hit with the composition of Lady, Be Good in 1924. As the two came together, they were stronger together, and as a result, they garnered high acclaim. They went ahead and composed songs for over 12 shows. Their notable compositions include"The Man I Love," "They Can't Take That Away from Me," "I Got Rhythm," "Fascinating Rhythm" and "Someone to Watch Over Me."

Following their remarkable compositions, some of their songs were chosen for an Academy Award. The three songs that were selected included "The Man That Got Away," "Long Ago (And Far Away)" and "They Can't Take That Away from Me."

Ira Gershwin tied the knot with Leonore in 1962.