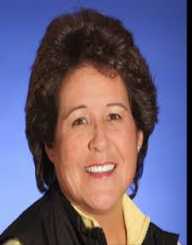 Nancy Lopez is one of the most renowned American female professional golfers of all times. She was even named the player of the year four times during her career. She was a recipient of a few of the prestigious awards that included the Frances Ouimet Award. Nancy was the first woman to receive this prestigious award.

Nancy Marie Lopez is regarded for her skills which pushed her towards success because of which she not only became the member of the LPGA tour in the year 1977 but also won 48 LPGA tour events including three major championships.

Nancy Lopez was born on 6th of January in the year 1957 in Torrance in the state of California. She always had the sports skills and looking at them, her father guided her, and she started playing golf professionally.

While studying, she never left playing golf and was awarded for the same. In 1976, Lopez was named All-American and Female Athlete of the Year for her play at the University of Tulsa. Later Lopez left college after her sophomore year and turned pro in the year 1977 and again was the runner-up at the U.S. Women's Open.

The year 1978 proved to be a golden year for Nancy Lopez where she made a mark for herself in the professional arena. She not only participated in her 1st full season LPGA tour but also won 9 tournaments out of which she holds the record for winning five consecutive tournaments in the year 1978. For the same outstanding performance, she even featured on the cover of Sports Illustrated in the same year. She also won the Rookie of the year along with the player of the year award for the year 1978.

Nancy Lopez won another eight times in the year 1979 and won multiple times each year from the year 1980 to 1984. In the coming years, she played only half-seasons in the year 1983 and 1984 due to the birth of her first child.

She came back strong the very next year by not only participating in the tournaments but also bagging positions and making her mark again for the same year. She again won the award for the player of the year and was also declared the Associate Press Female Athlete of the Year for the second time. But this came to a halt because she gave birth to her second daughter in the year 1986. Like a fighter she is, Nancy came back strong in 1987-1989 winning many championships.

As stated earlier, Nancy is considered as the best female golf player there ever to play. She not only won 3 major but all the LPGA championships. Though, she never won the US Women’s Open but finished second 4 times in her career.

Nancy Lopez was married twice, first to Tim Melton from 1979 to 1982 and then the couple divorced. She again got into a marriage with Ray Knight who was a major league All-Star baseball player in October 1982. The couple has been married for 27 years, and they also have three daughters from the wedlock.