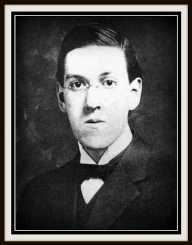 H.P. Lovecraft grew up on horror fantasies which in turn encouraged him to write about tragedies and fears. In his way, he rose to fame as the most prolific American horror fiction writer that the world has ever come across. His writings show that he possessed an undeniable talent that multiplies the readers fear. He perfectly knew how to throw in evil characters; the grave steps and creepy noises. At a glance, you might think that Lovecraft’s life was filled with lots of nervousness. But the truth is that he knew he was a fiction writer and at no time he came across about what he wrote.

It was on August, 20th 1890 that H.P. Lovecraft was first seen in the world in Rhode Island, Providence. His father was called Winfield Scott Lovecraft while his mother was known as Sarah Susan Phillips Lovecraft. At three years of age, his father died due to depression. It was here that his mother asked Lovecraft’s aunts Lilian and Annie to lend a helping hand. Since inception, Lovecraft grew as an intelligent and creative kid. In fact, he started to read poetry at three years old. When he was six years of age, he managed to write and read his poems.

Lovecraft’s great-grandfather bought for him more books which he read till dawn. It was his grandfather that introduced him to the world of horror through his scary tales of Gothic horror. After some time, Lovecraft started to fall ill, and it was concluded that he was suffering from Psychosomatic. By the age of ten, he joined Hope High School in Rhode Island. However, he continued to suffer from endless nightmares that almost made him not to close his eyes. Above all, he embraced himself where he used his night visions to write. It was in 1904 that Lovecraft’s grandfather died.

It was during his youth that H.P. Lovecraft opted to showcase his writing skill. From 1908 to 1913 he took extra time to write a variety of creative fictions. All the same, he once posted a letter called The Argosy to the pulps magazine. It was said that he triggered a debate of one of three romantic tales that was published by one of the pulps writers. The whole argument caused the President of the United Amateur Press Association; Edward F. Das to invite Lovecraft to his team in 1915.It was there that he wrote countless essays and poems.

In 1917 H.P. Lovecraft came up with some of his creative writings titled Dagon and The Tomb. It was in 1919 that Dagon book was published as his major work. It was in the same year that his dearest mother died due to depression.

Lovecraft as a Horror Fiction Writer

H. P. Lovecraft rose to fame when he wrote a fiction called Cthulhu Mythos aka Lovecraft mythos. He used a unique style that other writers such as August Derleth and Neil Gaiman were inspired to write. Several musicians including Metal and Metallica were also inspired by Lovecraft first book where they released a song titled The Call of Cthulhu in 1968. Not to mention several game plays were launched including one that was named as Call of Cthulhu and Chzo Mythos.

After his mother’s death, H.P. Lovecraft was invited with his friend for a convention ceremony in Boston. It was there that he met Sonia Greene. Although his family members didn’t get along with Greene, the two lovebirds got married in 1924. After some time, Lovecraft and Greene suffered from malnutrition due to lack of enough resources. It was there that Greene traveled to Cleveland in search of green pastures. Lovecraft was heartbroken, but he had no option since he didn’t have anything to call his own.

H.P. Lovecraft moved to Red Hook, Brooklyn where he started to hate his whole being. At that point, life was meaningless to him; he hated NY with all of his heart and soul. Failure and resentment made him write a short story titled The Horror at Red Hook. At the end of it all, he went back to his aunt’s house.

In 1933 H.P. Lovecraft went to live at Barnes Street where he wrote another short novel called The Case of Charles Dexter War. In regards to his creativity, he continued to showcase his writing skills, and in the process, he wrote At the Mountains of Madness novel. He also landed a position as a ghostwriter and publisher. In 1929 and 1930 Lovecraft wrote short stories such as Under the Pyramids, Imprisoned with the Pharaoh and Entombed with the Pharaohs.

Hailed overseas as a promising writer; his pockets didn’t cheer much glory since H.P. Lovecraft remained poor as a mouse church. Life forced him to live in affordable lodgings. In the mid of 1936 Lovecraft’s health started to deteriorate when he was diagnosed with malnutrition and cancer. He breathed his last on March 15, 1937, in Providence, Rhode Island. In his memory, writers such as Jorge Luis Borge wrote a memoir titled There are More Things.