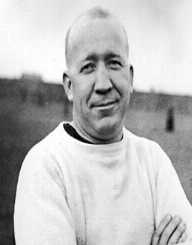 Football player Knute Rockne was born in Voss, Norway on the 4 March 1888. His family immigrated to the United States in 1893 and settled in Chicago. He was the son of Lars Knutson Rockne and Martha Persdatter Gjerme.

Rockne enrolled for a science degree the University of Notre Dame in 1910-1914 where he joined the football team as a fullback. He also had an interest in athletics and participated in track and field as well as pole vaulting. He subsequently became an All-American and captain of the team in 1913.

Following his graduation, Knute Rockne stayed on at Notre Dam where he was a graduate assistant in the chemistry department. At the same time, he was working as an assistant football coach and in 1918, became the athletic director.

During his tenure, Notre Dame were national champions in 1924, 1929 and 1930. Overall the teams won 105, lost 12 and tied 5 for the period 1918-1931. Rockne was an inspirational coach and speaker who became famous for promoting the game as well as products and businesses. He is recognized as one of the most successful coaches in the history of American college football. In March 1931, Rockne was flying to Los Angeles to take part in the production of The Spirit of Notre Dame when the plane crashed killing everyone on board. Tributes poured in headed by President Herbert Hoover who declared Rockne’s death was a national loss.