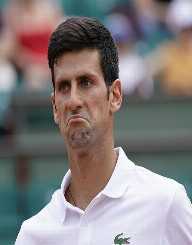 Serbian tennis player Novak Djokovic was born on the 22 May 1987 into a sport loving family in Belgrade, Yugoslavia. He has two younger brothers Djordje and Marko. He showed an interest in the sport from a young age and started playing tennis when he was four years old.

As a six-year-old, Novak Djokovic was spotted by Jelena Gencic, a Yugoslav tennis player and coach (b. 9 October 1936-Died 1 June 2013). Gencic was excited by the youngster’s ability and began to coach him. She encouraged him to dream about winning at Wimbledon. When he was twelve, Gencic advised his parents to allow him to be coach by Nikola Pilic at his tennis academy in Germany. At age 14, Novak Djokovic turned professional. He went on to win the European Championships singles, doubles and team competition. His form kept improving and then he won the Australian Open in 2008.

During his career, Novak Djokovic has won five Grand Slam singles Titles: The Australian Open in 2008, 2011 and 2012. Wimbledon in 2011 and the US Open in 2011. He became the sixth play to win three majors in a calendar year as well as being the first Serbian player to win a major singles title. He was also the youngest player to have reached the semifinals in all four Grand Slam events. He also won the Tennis Masters Cup in 2008, and the was on the Serbia Davis Cup team which won in 2010.

Awards Novak Djokovic has won include the Order of St Sava, presented to him by the Serbian Orthodox Church. He was voted The Best Sportsperson of Serbia and the Best Sportsman by the Olympic Committee of Serbia. He also received the BBC Overseas Sports Personality of the Year award in 2011 and won the Sportsman of the Year award at the 13th annual Laureus World Sports Awards in London, 2012.

In 2011 it was announced that the school in the Belgrade district of Banjica intended changing its name from to Novak Djokovic, replacing the name of a famous Serbian writer, Bora Stankovic.

Novak Djokovic is a member of the Serbian Orthodox Church.

Soccer is one of his interests, and Novak Djokovic supports the Red Star Belgrade, a Serbian club as well as A.C. Milan in Italy and Benfica in Portugal.

The Novak Djokovic Foundation was set up to assist early childhood education by pledging long-term grants and programmes.