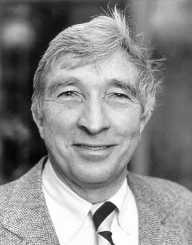 American writer John Updike was born on the 18 March 1932 in Reading, Pennsylvania to Wesley Russell Updike and Linda Hoyer. He was an only child and spent his formative years Shillington and Plowville, Pennsylvania.

John Updike did his high schooling at Shillington High School (1950). He went to Harvard University on a scholarship and obtained a degree in English (1954). Updike then studied at the Ruskin School of Drawing and Fine Art at Oxford University in England.

John Updike ambition had been to be a cartoonist. When he returned from Britain, he lived in New York, and The New Yorker magazine accepted his editorials, articles, and poetry. He also worked as a literary critic.  His first book: The Carpentered Hen and Other Tame Creatures, a collection of verse, was published in 1958. The same year he had his first novel, The Poorhouse Fair, published.

By the late 1950s, John Updike decided to focus on writing fiction full-time. Publications include Rabbit Run (1960) which is about a talented athlete who struggles with responsibilities and the boredom of life in a small town; The Centaur (1963) and Of the Farm (1965) followed. Other books in the Rabbit Run series including Rabbit Redux (1971), Rabbit is Rich (1981) and Rabbit at Rest (1990). The final book in the series being Rabbit Remembered (2001).

Other awards include Commandeur de l'Ordre des Arts et des Lettres (1995), Medal for Distinguished Contribution to American Letters from the National Book Foundation (1998), Fitzgerald Award for Achievement in American Literature (2002), PEN/Faulkner Award for Fiction (2004), the Read Award for the Short Story (2006) and the American Academy of Arts and Letters Gold Medal for Fiction (2007). He was also nominated for the Man Booker Prize (2005).