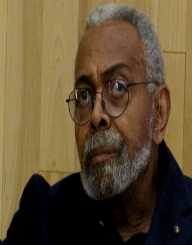 Amiri Baraka was born on October 7, 1934, in Newark, New Jersey. His father Colt Leverette Jones was a postal worker and lift operator and his mother Anna Lois was a social worker.

Baraka attended the Barringer High School in New Jersey and won a scholarship to attend Rutgers University. He enrolled at Rutgers in 1951, but the following year he transferred to Howard University. He took classes in philosophy and religion, which became the foundation of his writings. Baraka also attended the Columbia University and the New School for Social Research, but never obtained a degree.

Amiri Baraka joined the US Air Force in 1954, eventually reaching the rank of sergeant. However, an anonymous letter sent to his commanding officer accused Baraka of communism, and several Soviet writings were found in his possession. After this scandal, Baraka was reassigned to gardening duty and was later dishonorably discharged for violating his oath. Baraka began to write poetry while he was in the army.

After being discharged, Baraka moved to Greenwich Village and began working in a music records warehouse. During this time, Baraka became increasingly interested in jazz and was in contact with several avant-garde Black Mountain poets and New York school poets. In 1958, Baraka married Hettie Cohen. The couple had two children together, and they founded the Totem Press. Totem Press published works by several poets, like Jack Kerouac and Allen Ginsberg. Totem Press also released the quarterly literary magazine Yugen. During the early 1960s, Baraka was also the editor and critic for the Kulchur journal.

In 1961, Baraka founded the New York Poets Theatre. The same year, he was the co-author of “Declaration of Conscience” which supported Fidel Castro’s regime. Baraka’s first collection of poems Preface to a Twenty Volume Suicide Note was published in 1961. In 1963, he, under the name LeRoi Jones published Blues People: Negro Music in White America. Under his pen name, Baraka also released the play Dutchman. The play premiered in 1964 and received the Obie Award for Best American Play. In 1965, Baraka changed his name to Amiri Baraka, left his wife and two children and moved to Harlem.

After moving to Harlem, Baraka became increasingly involved in politics. He criticized the Civil Rights Movement and expressed his need for violence to establish a “Black World.” The poem “Black Art” became the political manifesto of the Black Arts Literary Movement. In 1965, in response to the assassination of Malcolm X, Baraka published his “A Poem for Black Hearts.” The following year, Baraka married for the second time to Sylvia Robinson. In 1967, Baraka took part in the Newark riots and was arrested for carrying an illegal weapon and resisting arrest. He was sentenced to three years in prison. The same year, Baraka released his jazz criticism book Black Music.

During late 1960s and early 1970s, Baraka continued to gain a lot of controversial attention, when he published several anti-Jewish poems and articles. During the mid-1970s, Baraka began to distance himself from Black nationalism, instead of becoming a communist. In 1979, he took a position at the State University of New York in the Stony Brook’s Africana Studies Department. The following year, he became the assistant professor, and in 1983, he was promoted to associate professorship. Baraka was arrested in Manhattan in 1979, for causing a scene with his wife. Although he was found not guilty of attacking his wife, Baraka was sentenced to 90 days in prison for resisting arrest.

In 1980, Baraka published his essay titled Confessions of a Former Anti-Semite. In 1982 he took a position as visiting a professor at Columbia University, where he taught the course “Black Women and Their Fictions.” The same year he also took a visiting appointment un Rutgers University. In 1989, he won the American Book Award and the Langston Hughes Award.

In 2002, Amiri Baraka became the Poet Laureate of New Jersey and spent two years in the position. The same year, he collaborated with the hip-hop group The Roots on their album Phrenology.

Baraka died on January 9, 2014, in New Jersey. He had struggled with diabetes and spent the last month of his life in intensive care unit.