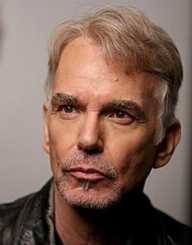 Billy Bob Thornton is a native of Hot Springs, where he was born in the American state of Arkansas in 1955 and August 4th to be precise. He moved to the state of California. He settled in Los Angeles to make a living by acting as for a living. He also dabbled in script writing and taking up menial jobs in between to make ends meet. He was also known to have got involved in tele-marketing and the touchy world of fast food management.

Billy’s first film debut was “Hunter’s Blood,” and this was released in the year 1987. Also, he featured in the television series “The Man Who broke 1,000 Chains” in the same year. Other members of the cast included A-listers like Sonia Braga, Kyra Sedgwick, and the inimitable Val Kilmer.

Billy helped develop the character of Karl Childers during the production of the movie. This was a character that required the display of a monologue in a dramatic fashion. He replayed this role in the year 1993 in a short film that was titled “Some Folks Call It a Sling Blade,” which was directed under the lead of George Hickenlooper.

He was welcomed to limelight for his role in the production “Hearts Afire” which debuted in the year.

Billy Bob Thornton is however commonly cited for writing, directing and starring in the feature production known as Sling Blade in 1996. This was the film that gave Billy a nomination and award for the Best Adapted Screenplay in the Golden Globes.

His other memorable roles include the jailer turned lover in Monster’s Ball, which included steamy scenes with African-American star actress - Halle Berry. Bad Santa, Friday Night Lights, The Man Who Wasn't There, Bandits and A Simple Plan, were other films that earned Billy huge accolades.

The other rave production directed by Billy included “All the Pretty Horses”. He also co-starred in the popular “Fargo”, which was a reputed TV Series.

He earned the Oscars for A Simple Plan and Sling Blade.  These highlights were to turn Billy’s fame the right way in 1997 as he got a role in the film, U-Turn produced by the master filmmaker, Oliver Stone.

Amazingly, though better reputed for movies, Billy Thornton has also raised the roof as a singer and also as a songwriter. He was at a time the lead singer for “The Boxmasters”, which performed as a rock blues outfit.

He has been credited with a couple of solo albums, which were released over the years.

Billy Bob Thornton was on set with the well-known actor, Bruce Willis for Armageddon in 1998. He reprised turning up with Bruce in 2001 for the film “The Man Who Wasn't There.” The film was considered an offbeat and was a Coen brothers’ production with Joel and Ethan.

The comedy film, Bad Santa came out in 2003, and Billy Thornton was cast as a high-profile actor once again. The Alamo is another worthy mention as it was a big-budget affair that also caught viewers’ attention and rave reviews. In 2005, he was in for a remake of Bad News Bears, and the film was greeted with mixed reception.

He was to play on the lanes of the American president by taking on the role of Clintonian adviser, James Carville in the film, Primary Colors. It was a challenging role cast in the White House years of Bill Clinton. This hit the screen in 1998, and it was a good take for the Arkansas native.

Billy Thornton has also worked alongside Penelope Cruz and Matt Damon and this was the case in the film “All the Pretty Horses”.

He has several notables under his belt and will not be forgotten as the tragic foil in the film “A Simple Plan”, which was a Sam Raimi production.

In 2016, he starred as Billy McBride in the television series Goliath and American Dad. Some of his more recent works include Whiskey Tango foxtrot, Bad Santa 2 and Hunter Killer in 2016. In 2017, he was credited with London Fields.

After a rush of small roles in otherwise successful films, Billy Bob Thornton was to try out his aptitude in screenwriting, and this proved right in 1996. “Some Folks Call It a Sling Blade” is a real highlight of Billy’s writing career and as a full-length feature, it did not go without a mention.

One False Move was a crime thriller which was co-written by Billy and this provided grounds for him to drive his screenwriting skills.

The presence of four children in Billy’s life is the highlight of his family life. He had Amanda from his first stint in marriage with Melissa Gatlin.

Harry and William came from his marriage to model, Pietra Dawn Cherniak. Billy Bob Thronton married Connie Angland in 2014 and they both have a daughter who was christened Bell.