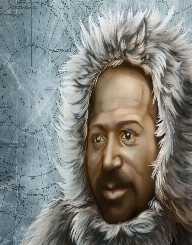 Matthew Alexander Henson was born on August 8, 1866, in Nanjemoy, Maryland. His parents were sharecroppers and free people of color before the American Civil War. He had an older and two younger sisters. Henson’s mother died when he was only two years old. After his mother’s death, his father remarried to a woman named Caroline, who had daughters and a son.

After his father’s death, Henson was sent to Washington D.C., where he lived with his uncle. There he began attending school, which was paid by his uncle. Henson could not stay in the school after his uncle died and started supporting himself as a dishwasher at a cage. When Henson was 12 years old, he moved to Baltimore, Maryland and began working as a cabin boy on a merchant ship. The ship was led by Captain Childs, who took Henson under his wing, teaching him how to read and write.

In 1887, Mathew Henson was working in a clothing store in Washington D.C. when he met Commander Robert E. Peary. When Peary learned that Henson is experienced in the sea, he recruited him for his expedition to Nicaragua. During this expedition, Henson impressed Peary with his skills and was drafted as his first man in voyages.

Henson and Peary continued working together for the next 20 years, with most of their trips going to the Arctic. Henson managed to master the Inuit language and often traded with them. He was also a skilled dog sled driver and craftsman, which was especially valuable in the harsh climate of the Arctic. In 1909, he and Peary reached the Farthest North point of any Arctic expeditions.

In 1908, Peary took on his eighth expedition attempting to reach the North Pole. He planned to use a system of cached supplies along the way. Therefore the expedition was huge. The expedition consisted of 39 Inuits, 246 dogs, 50 walruses and 70 tons of whale meat. Henson was selected to lead a team of 6 Inuit to make the final run to the North Pole. During the trip, Peary could no longer walk and had to use a dog sled. Henson was the one who planted the American flag on the Pole.

In 1912, Mathew Henson published his memoir A Negro Explorer at the North Pole, which told the story of his arctic explorations. In 1947, he collaborated with Bradley Robinson on Dark Companion, a biography of his life. Peary received several honors for his leadership. However, Henson’s efforts were largely ignored. After reaching the North Pole, he spent the next three decades working in the United States Customs House in New York. In 1937, he was admitted to the Explorers Club, and in 1948, he was made the honorary member. The Congress also awarded him with the Peary Polar Expedition Medal.

Mathew Henson's first marriage did not last long since he and his wife separated when he started the expeditions with Peary. His second marriage was to Lucy Ross in 1907. The couple had no children. During his voyages, he and Peary had Inuit women as “country wives,” and they had several children with them.