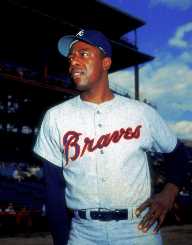 Hank Aaron is a baseball player, nickname "Hammering Hank," is known as one of the greatest hitters in the history of the sport. He was also a civil right activist who promoted integration between races.

Henry (Hank) Louis Aaron was born on 5th February 1934 in  Mobile, Alabama. He was born in a poor section called “down the Bay,” which was reserved for African Americans. His parents were Herbert Aaron, Sr. and Estella (Pritchett), Aaron. Hank is the third child of eight children. He had to help his parents support the family by working odd jobs.

Hank Aaron taught himself how to play baseball by hitting bottle caps with sticks; then he would create his bats and balls out of materials he found. As a result of this, Hank Aaron hits cross-handed. His idol was Jackie Robinson of the Brooklyn Dodgers, who was the first African American player in the major leagues. Aaron family moved to Toulminville neighborhood when he eight.

Hank Aaron attended Central High School as a freshman and a sophomore; it was a segregated high school in Mobile. They did not have organized baseball, and so he played outfield and third base for the Mobile Black Bears, a semipro team. On the baseball diamond, he played shortstop and third base. Hank also enjoyed playing football; he was obsessed with sports.

In 1949, fifteen-year-old Hank Aaron had his first tryout with Brooklyn Dodgers, but he was unsuccessful. After that, he enrolled into Josephine Allen Institute, a private school in Alabama that had an organized baseball program. During his junior year, he joined Pritchett Athletics for $2 a game. He later joined Mobile Black Bears, a Negro League Team that paid him $1 more. Following that, he quit his studies to play baseball in 1951.

18-year-old Hank Aaron quit school to play for the Negro Baseball League's Indianapolis Clowns in 1951. He won his club the 1952 World Series. Soon he was recruited by Milwaukee Braves (formerly of Boston and later of Atlanta) for $10,000, beating rival New York Giants by $50 extra a month. Aaron was assigned to the Eau Claire Bears, where he got his first Northern League Rookie of the Year honors and learned how to bat properly.

In 1953 Hank Aaron moved to Braves' Jacksonville, Florida team, in the South Atlantic (Sally) League. It was in the south. Hence he experienced severe racism. Even then, he was named the league's most valuable player in 1953. Hank spent the winter of 1953 playing in Puerto Rico with manager Mickey Owen. Owen helped Aaron to transition from the second baseman to outfielder, and improved his batting stance. Due to that stint, Hank was not drafted into the Korean War.

On March 1954, an injured player allowed him to start playing. Hank Aaron hit a home run, resulting in a contract and a uniform with number 5. He played with number 5 until he suffered a fractured ankle, and changed his name to 44.

At the end of 1973 season, 39-year-old Hank Aaron clubbed 40 home runs and finished one short of Babe Ruth’s career mark of 714 home runs. Despite death threats, he hit the 715 home run in a game against Los Angeles Dodgers. He finished the 1974 season with twenty home runs; he was traded to Milwaukee Brewers in 1975.

After retiring in 1976, Hank became Atlanta Braves’ executive vice president and became a spokesman for minority hiring in baseball. His autobiography, I Had a Hammer, was published in 1990. Hank founded the Hank Aaron Rookie League program

1988 - Wisconsin Athletic Hall of Fame for

1999- Hank Aaron Award was created to commemorate the best overall hitter in each league.

2016- the Order of the Rising Sun, Gold Rays with Rosette, one of Japan's highest honors, for his work with the World Children's Baseball Fair.

Hank Aaron was the first one to hit 500 home runs and reach 3,000 hits. Hank and his younger brother Tommy were the first siblings to play in a League Championship Series as fellow players. In 1973, Aaron received a plaque from the US Postal Service for receiving more mail than any person excluding politicians - for his attempt at breaking Babe Ruth’s record.

Hank Aaron met his wife Barbara Lucas in 1953, they married on 13 October, after the seasoned ended. They were married for eighteen years; their marriage ended in divorce in 1971. Hank and Barbara have five children, although one of the twins passed away at eleven days.

In 1973, he married Billie Williams of Atlanta and adopted her daughter Ceci.

Hank Aaron and his wife Billye began the Hank Aaron Chasing the Dream Foundation in 1994 to provide scholarships to underprivileged youth from across the United States. Initially, the foundation set out to award 755 scholarships but had since surpassed that number.

The Aarons donated $3 million to the Morehouse School of Medicine in Atlanta, going towards expansion and a new pavilion.

"Having sports teams legitimized us. It gave us the opportunity to be known for something that was not going to be a national embarrassment. Henry Aaron was a big part of that because he integrated pro sports in the Deep South, which was no small thing. He was the first black man that white fans in the South cheered for." President Carter

"On the field, blacks have been able to be supergiants. But, once our playing days are over, this is the end of it, and we go back to the back of the bus again." Hank Aaron