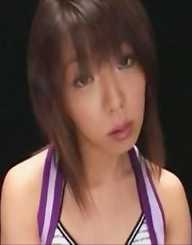 Bunko Kanazawa is an actress in the adult movie world. She was introduced to the industry by a friend. Her agency gave her the stage name of Bunko Kanazawa. Her debut release was in 1997, titled 18 Years Old on the Media Station Cosmos Plan label. She had a second release later that same year. As well as DVDs and videos, Bunko Kanazawa also released her work on VCDs. In 1997 she released a “Special Edition” VCD which was over four-volumes and a compilation from previous movies.

Bunko Kanazawa went to the Atlas21 label, and her first release there was Legend of an AV Idol in early 1999. The video was based on her career, and how she got to be number one in the Japanese AV industry. She also did a two-volume self-portrait series for Alice Japan.

In 2001 Bunko Kanazawa released Dream School 2, which was part of the popular Moodyz series. After that, Bunko Kanazawa decided to concentrate on her stripping career, and no further movies were released. In 2003, Bunko Kanazawa had a turn-around in thinking and released another movie in the Moodyz series. She continued to work for Moodyz after this but announced yet again in 2005 that she was retiring from the industry. Once again, she returned to the adult AV industry in 2006. She made some uncensored films that were put onto the internet and charged on a pay-per-view revenue model. The work was compiled into two DVDs which were released in 2007 and 2008 respectively.

In December 2007, Bunko Kanazawa was back with Moodyz and had a movie release, followed by another in January 2008. She had further work released in 2009.