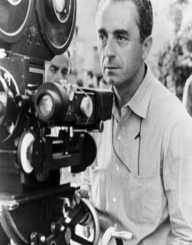 Michelangelo Antonioni was born in 1912, on September 29 into a middle-class family. He grew up in the bourgeois surroundings of the Italian province of Emilia-Romagna to Elisabetta and Ismaele Antonioni. He picked up an early interest in the art of music and also experimented with painting as a child.

Michelangelo Antonioni learned to play the violin early in life, and by the time he turned nine years old, he played his first concert. His exploits with the cinema were one that overshadowed his painting skills, but he kept his painting slant for the rest of his adult life.

Michelangelo Antonioni attended the University of Bologna for the four years to 1935, and he majored in Economics and Commerce. At this time, he crafted pieces for the local newspaper and also churned out some paintings. By 1939, Michelangelo Antonioni was back to school in Rome while studying for a directorship certification at the School of Cinema. He was also an avid tennis player who became a champion in the amateur circuit in northern Italy within this period. He is thought to have left the Cinema School after spending his first three months there.

In 1942, Michelangelo Antonioni worked with a colleague to script the war film, “A Pilot Returns,” which was told from an Italian slant. Roberto Rossellini shared the credits with him as a co-writer of this movie. Roberto also directed the movie, and they both shared the plaudits together. This led Antonioni to sign a contract with the movie production company, Scalera.

Michelangelo Antonioni worked on his first documentary in the year 1943, and this was centered on the life of the people who lived in PO Valley. Going forward, Antonioni churned out a couple of short films that dwelt on commoners and how they lived their lives. Most of these films became public knowledge after 1947 when they were recovered from the archives.

The first full- length movie he made was released in the year 1950, and it featured Lucia Bose and Massimo Girotti. This was a love-themed movie and was titled “Story of a Love Affair.” Antonioni made the Italian middle class his subject of review in the movie. This work also earned Michelangelo Antonioni a Special Silver Ribbon award in the Nastro d'Argento and was well received by film critics. It was ground-breaking in the sense that it explored a theme that was not the buzz at the time,

The film also had its fair share of controversy but the next piece, ‘I Vinti’ faced censorship gavel in the United Kingdom. The Vanquished was also well received by cinema-goers and film critics alike. The movie was set in London, France, and Rome, and this focused on youths who delved into murderous atrocities.

Michelangelo Antonioni bagged the Cannes Jury Prize in 1960 for his ‘The Adventure.’ The movie was like the first of what was accepted as a trilogy since it ran a similar thread like the two others. The theme and style were all alike as the theme of alienation of man in a contemporary world explored. This film was what gave rise to Antonioni’s first acclaim on the global scene and became the launch pad for Monica Vitti on the international stage. The drama which played the lead role in the trilogy was titled “The Night,” and it hit the big screen in January 1961. The list of laurels that it won includes The 1961 Golden Bear from the Berlin International Film Festival. It also got recognition for the Best Directed Film on the platform of the David di Donatello Awards.

The Eclipse was the third installment of the trilogy and it hit the big screen in 1962. L'Eclisse also starred Monica Vitti and was able to get the Jury Prize during the Cannes Film Festival in 1962. It also received a Palme d 'Or’ nomination.

Michelangelo Antonioni made his first color film in 1964, and it was tilted The Red Desert and also got huge acclaim at the Venice Film Festival. It also starred Monica Vitti and was released in the U.S in 1965. This effort earned a Golden Lion award at the 1964 Venice Film Festival.

The central theme of the films that Michelangelo Antonioni made was centered mainly on the subject of social alienation. This is what is recurrent in the 1955 piece, The Story of a Love Affair as well as The Lady Without Camellias, made in 1953 are the testament to this line of thought. The Outcry was made in 1957, and it also follows the same narrative. What was however different was Le amiche or The Girlfriends, in the sense of the script seams. There were long takes in this movie that seemed not directly related. However, the technique proved to be successful as Antiononi took on this in several of his follow-up projects.

Michelangelo Antonioni put up a documentary titled “Chung Kuo, Cina” which got screened in the Chinese capital of Beijing in the November 2004. The Chinese authorities railed against it as anti-Chinese in outlook and concept. He made “When Love Fails” in the year 1953

Michelangelo Antonioni's other remarkable works include ‘Lo sguardo di Michelangelo,’ which translates as The Gaze of Michelangelo. This was made in 2004.

Michelangelo Antonioni got married in 1942 to Letizia Balboni, but the union ended in 1954. He was known to have had a relationship with Monica Vitti in the decade through the 1960’s. And she starred in the trilogy that defined Antonioni’s work of that era.

He remarried in 1986 to Enrica Antonioni.