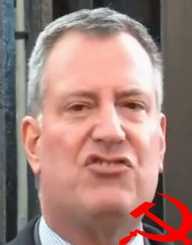 Bill de Blasio was born on May 8th, in 1961. He is famous for being an American politician. He once served as the New York Public Advocate for three years beginning in 2010. He was later elected to serve as the New York City’s mayor in 2013.

Bill de Blasio was born Warren Wilhelm Jr. on May 8th, in 1961. His birthplace was in New York City. He was the third born son to Maria Angela and Warren Wilhelm. De Blasio’s elder brothers are called Steven and Donald. His father joined the U.S army in 1942. Even though Blasio was named as Warren Wilhelm Jr. during his birth, he was often called Billy or Bill while growing up. Unfortunately, he did not have the privilege of growing up with both of his parents on his side. When he was only seven, his parents divorced following his father’s drinking problems. As a result, de Blasio alongside his elder brother Donald were raised by their mother. This influenced him to take up his mother’s name ‘de Blasio.’

Bill de Blasio went to Cambridge Rindge and Latin School where he was once a member of the student’s government. During this time, his schoolmates referred to him as “Senator Provolone.” In 1979, he graduated from the institution. After this, he joined the New York University where he majored in metropolitan studies. He did not stop there; he went to Columbia for his Master’s degree in International Affairs. He pursued this course at the School of International and Public Affairs.

Bill de Blasio was introduced to city politics in 1989. This occurred when he was working for David Dinkins during his campaign for the office of the mayor. He volunteered to work as the coordinator in the Dinkins’ campaign. After that, when Dinkins won, he became an assistant working under him.

Shortly after, he was tapped by Charles Rangel to work for his as his campaign manager in his 1994 bid for U.S. Representative Office. In 1997, de Blasio was called to serve under the U.S Department of Housing and Urban Development. He was appointed as the regional director for the government body.

Later, in 2000, Bill de Blasio went again as worked as Hillary Clinton’s campaign manager during her successful bid for the office of the U.S. Senate.

Following Bill de Blasio's successful run in campaigning for other people, he decided to compete for the 39th district of the New York City Council. This meant that he would be representing Brooklyn. Fortunately, he won the election by garnering 32 percent of the total votes.

Bill de Blasio went ahead and competed for the New York City Public Advocate post in 2008. This was a competitive post as it was crowded with a large pool of people including Mark J. Green, a former Public Advocate. The following year in September, de Blasio emerged victorious garnering 33 percent of the total votes during the primary election. A few weeks later, he also defeated Green at the run-off elections. In November 3rd, 2009, he defeated Alex Zablocki during the general elections. De Blasio was thereafter inaugurated in January 1st, 2010.