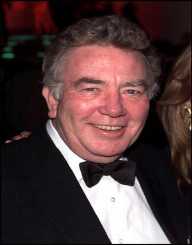 Albert Finney was an actor, playing in William Shakespeare plays before switching to films.

Albert Finney was born on 9th May 1936, in Salford, Manchester, England. His parents were Alice and Albert Finney, Sr., who was a bookmaker. He has an older sister Marie. The family moved to The family moved to Gore Crescent, Weaste, after the Germans bombed their Pendleton house during the war. Albert went to Tootal Drive Primary School and then Salford Grammar School. After graduating high school, he attended the Royal Academy of Dramatic Arts on the encouragement of a teacher.

Albert Finney became a Shakespearean actor in the late 1950s, joining Royal Shakespeare Company. Albert first appeared in 1958; he had a part in Jane Arden's The Party. He replaced a sick Laurence Olivier as Coriolanus in Stratford in 1959.

Venturing into a film, Albert Finney first appeared in The Entertainer with Laurence Olivier in 1960. Albert then starred in Saturday Night and Sunday Morning in the same year. He was an instant hit, and this led to a role in the series Angry Young Man.

He produced a few television productions for the BBC in the 1990s; these include The Green Man, A Rather English Marriage. He had the lead role in Dennis Potter's final two plays, Karaoke in 1996 and Cold Lazarus the year after.

Albert Finney then starred in Tom Jones in 1963, and his career catapulted. He directed and starred in Charlie Bubbles after that. He also starred in the 1964 thriller Night Must Fall, and 1967 Two of the Road with Audrey Hepburn. Albert Finney showed that he could sing as well as act in 1970; he was Ebenezer Scrooge in the musical version of A Christmas Carol.

Albert was also famous for his role as Hercule Poirot in 1974 film Murder On the Orient Express. He continued to act until now. In 2002, he played Winston Churchill in ‘The Gathering Storm.' Albert Finney acted as Kincade in 2012 James Bond movie, Skyfall.

Albert Finney continued to act on stage, keeping his association with the National Theatre Company in London. Albert performed fourteen titles, ending with Art in 1997. He received nominations for Luther and Art and won Olivier Award for Orphans in 1986.

Albert Finney married the first wife, Jane Wenham in 1957; they have a son together. Simon works as a camera operator. He and Jane divorced in 1961. He married French actress Anouk Aimée in 1970; the marriage lasted eight years. Anouk left him for Ryan O’ Neal in 1975, the divorce finalized in 1978. In 2006, he married Penelope Delmage.

In 2007, Albert battled prostate cancer. In May 2011, Finney disclosed that he had been receiving treatment for kidney cancer.

Albert Finney was nominated for thirteen BAFTA and won two: for Saturday Night and Sunday Morning and Gathering Storm. He was nominated many times for Oscar, but he did not win. Albert skipped going to Oscars and turned down an offer of a CBE in 1980 and a knighthood in 2000. He has three Golden Globe and one Emmy Award.