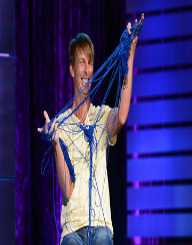 American actor and comedian Jack McBrayer was born on the 27 May 1973 in Macon, Georgia in the United States.

After high school graduation, McBrayer studied at the University of Evansville in Indiana where he graduated with a degree in theatre administration.

Over the years Jack McBrayer has won numerous Screen Actors Guild Awards nominations and won the Screen Actors Guild Awards: Outstanding Performance by an Ensemble in a Comedy Series in 2008. In 2016 he was nominated for an Emmy in the Outstanding Actor in a Short Form Comedy or Drama Series category. He also received an Emmy nomination in 2009 for Outstanding Supporting Actor in a Comedy Series for his portrayal of Kenneth Parcell.