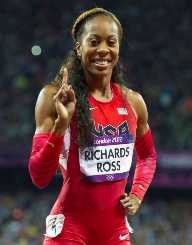 Sanya Richards-Ross was born on February 26, 1985, in Kingston, Jamaica. She gained interest in running at the age of seven. She received education at the Vaz Preparatory and later at the Immaculate Conception High School. When she was 12 years, her family moved to the United States, settling in Fort Lauderdale, Florida. She enrolled at St. Thomas Aquinas High School, graduating in 2002. While there, she participated in basketball, and field and track events. She won the National High School Female Athlete of the Year. A promising athlete, Richards-Ross won a silver medal in the 400-meter race at the 2002 World Junior Championships. She subsequently won bronze in the 200-meter event. That same year, she naturalized for the United States.

Richards-Ross turned pro during her sophomore year at the University of Texas. She qualified as part of the US team for the 2004 Athens Olympics. The US team won gold at the 4×400 meters relay. During the 2005 World Championship in Athletics, she won silver in the 400 meters. In 2006, she set a new US 400-meter record with 48.70 breaking the 48.83 by Valerie Brisco-Hooks. That year she won the IAAF 2006 Female World Athlete of the Year.

Richards-Ross won bronze in the 200-meter event at the 2008 Beijing Olympic Games. During the 4×400 relay, she helped the US to win the gold medal. The following year, she won the 400-meter national title and followed it with her fourth Golden League race in 400-metre. That same year, she won her first global championship in the 400-meter event at the 2009 IAAF World Athletics Championships in Berlin.

Qualifying for the 2012 London Olympics, Richards-Ross won gold in the 400-meter with 49.55. She also helped the US team to win gold in the 4 × 400-meter events. This made her a three-time Olympic gold medallist. Following her success at the Olympics, she won the Diamond League races over 400-metre in Stockholm and Zurich. On July 1, 2016, Richards-Ross suffered a hamstring at the Olympic trials, which ultimately ended her career. She provided commentary for the track and field events at the 2016 Summer Olympics.

While at the University of Texas, Richards-Ross dated professional football cornerback, Aaron Ross. In 2007, the couple engaged and later married on February 26, 2010. They have a son Aaron Jermaine Ross II. Richards-Ross confessed to having an abortion prior to the Beijing 2008 Olympics. In 2016, she received induction into the Texas Track and Field Coaches Hall of Fame.