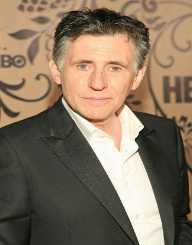 Gabriel James Byrne has been famous for acting in a large number of films and TV shows as well as producing, writing and directing similar works in the entertainment industry. He has a large range of successful movies like ‘The Usual suspects’, ‘Miller’s Crossing’, ‘End of days’, ‘In the Name of the Father’, etc., under his belt. Gabriel’s fame rose higher when he won the Golden Globe Award for best actor for his role of ‘Dr. Paul Weston’ in the TV series ‘In Treatment’.

Gabriel Byrne was born on 12th of May, 1950 in Walkinstown, a suburb of Dublin, the capital of the Republic of Ireland. He was born to devout Roman Catholic parents. He was eldest amongst his siblings and the 5 younger ones were Donal, Thomas, Breda, Margaret, and Marian. His father, Daniel, was a cooper and used to make barrels for the Guinness brewery while his mother Eileen served as a hospital nurse in Galway.

Under the influence of his family, he was raised Catholic and got his early education under the aegis of the Irish Christian Brothers. He underwent a training of about 5 years to become a priest when he was sent to Birmingham, England at the age of 11. He used to play football for Stella Maris. He continued with the higher studies at the University College Dublin with the help of a scholarship. Here, he earned a degree in archaeology and mastered the Irish language. After graduation, he worked in many jobs ranging from cooking to bullfighting and it was a phase of instability in his life.

While doing the various jobs he somewhere realized his potential in acting. Therefore, he started his journey of acting in 1974 with the Dublin Shakespeare Society. Then he joined Dublin’s Focus Theatre and the Abbey Theatre and showcased his skills on the stage. Subsequently, Byrne continued to hone his artistry at the Royal Court Theatre and the Royal National Theatre in London.  He started landing minor roles in films after his debut in On a Paving Stone (1978).

The final season of ‘The Riordians’, an Irish TV show, provided him with the required break in the late 70s. Later, he also starred in its spin-off series, Bracken. In 1981, he embarked on his acting career in films with the role of ‘Lord Uther Pendragon’ in the American fantasy film Excalibur.  It was shot entirely in Ireland. However, he continued working in television shows even after the success of his first film. His work in movies like Defence of the Realm (1985) and in miniseries of Wagner (1983) and Christopher Columbus (1985) was highly praised.

After achieving fame with the help of the aforementioned and other such roles, he gradually got more involved with the big screen. Movies like Gothic (1986), Lionheart (1987) and Siesta (1987) helped him to develop a firm base in the industry. The 1990s put Byrne on the path of stardom. His film Miller’s Crossing (1990) didn’t perform well at the box-office. But Byrne’s role was widely appraised by the critics and the film holds a 91% approval rating on the ‘Rotten Tomatoes’. The Usual Suspects (1995) is another movie starring Byrne which is considered one of the best heist and mystery movies in America. His other notable works in the decade include The End of Violence (1997), The Man in the Iron Mask (1998), Enemy of the State (1998), Stigmata (1999) and End of days (1999). His started to produce films too. One of them In The Name of Father (1993) was nominated for several awards and received wide acclaim.

The 2000s marked his return to the theatre. He played the role of ‘King Arthur’ in Camelot. His role as ‘Dr. Paul Weston' in  In treatment helped him win the prestigious Golden Globe Award for best actor in a Drama in 2008. He also starred in six episodes of the first season of Vikings TV series in 2013. Some of his recent appearances on the big screen include Vampire Academy (2014), The 33 (2015), Mad to Be Normal (2017) and Hereditary (2018).

Byrne is known to have had a relationship with the TV producer and presenter, Aine O'Connor. This relationship endured 12 years from 1974 to 1986. While working on Siesta (1987) Byrne came close to the actress Ellen Barkin. In order to maintain an effective relationship with her, he moved to New York City to live with her. In 1988, he married Barkin. The couple had a son John Jack Daniel in 1989 and later a daughter Romy Marion in 1992. However, the pair separated in a peaceful manner in the next year. Finally, they got divorced in 1999.

Byrne had his second marriage with Hannah Beth king at Ballymaloe  house in Cork in 2014. There is a wide age gap between them yet Gabriel states that the age difference doesn’t affect their relationship in any manner. In February 2017, they welcomed their first child Maisie James, a daughter, into the family. Byrne became a father at the age of 67 and calls it a bittersweet experience. Though the couple lives in New York Byrne is keen to bring her daughter to Ireland so that his family members can meet her.

Gabriel Byrne revealed in an interview in 2011 about his sexual exploitation by the priests during his childhood. His comments on The Gathering as a ‘shakedown’ of the diaspora created a huge controversy in 2012. On the recent #MeToo movement, he says that it hasn’t gone far enough and also called Harvey Weinstein as “an absolutely ferocious bully”.

Byrne is known for his active involvement in charity and related programs. He was appointed as a UNICEF Ireland Ambassador in November 2004. He is helping the children who are affected by HIV/AIDS. He also supported the ‘Believe in Zero’ campaign launched by UNICEF Ireland. He is also a well known Human Rights activist and is involved in various Amnesty International campaigns. He has also supported Irish Arts Center in New York and Irish Hospice Foundation.