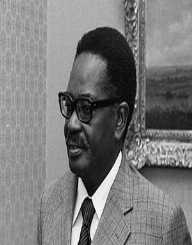 Holden Roberto was an Angolan revolutionary and is best known for his role in the Angolan Civil War and the Cold War.

Holden Roberto was born on 12 January 1923 in Sao Salvador which is in modern-day Angola. At the time Angola was a Portuguese colony. While still an infant Roberto and his family moved to the Belgian Congo and settled in Leopoldville. He received his education from a Baptist missionary school. Roberto worked for the Belgian Ministry of Finance in the Congo colony and moved from Leopoldville to Stanleyville. In 1951 he visited his homeland and became inspired to fight for independence against the Portuguese.

Holden Roberto with Barros Necaca founded the Union of Peoples of Northern Angola in 1954. The group had the goal of driving the Portuguese from Angola and creating an independent country. As head of the group Roberto attended the All-African Peoples Congress in Ghana in 1958. The Congress included representatives of the independent African nations of Ethiopia, Ghana, Guinea, Liberia, Libya, Morocco, United Arab Republic and Tunisia, as well as trade union and independence movement leaders from other African countries.

The congress called for all African countries to be granted independence and accepted that violence was legitimate in some struggles such as the Algerian War of Independence. As well as Roberto the Congress was also attended by some leaders and future leaders of several African nations. Thanks to the Cold War Roberto was able to secure funding from the United States of America due to not being a communist.

Holden Roberto had made international contacts while visiting the United Nations. He then returned to the Congo which had recently gained independence from Belgium. There he began organizing a militia and planned to invade Angola. In March of 1961, he and over four thousand rebels crossed into Angola and began massacring white settlers and native Angolans. Well over a thousand were killed in Roberto’s attacks and farms and outposts razed.

Despite essentially committing war crimes Roberto met American president John F Kennedy the same year and received renewed support. Roberto’s UPA joined with the Democratic Party of Angola to form the National Liberation Front of Angola or FNLA. The FNLA received support from some anti-Soviet countries such as France, USA, China and Israel. They also were aided by the Apartheid South African government and allowed to operate out of Zaire.

However, others within the FNLA began to see Roberto as a Western stooge who was in the pockets of the first world nations and had no political plan for a future independent Angola. This led to a splinter group UNITA being formed. However, the right wing groups were caught off guard when the fascist government in Portugal collapsed in 1974, and its African colonies were granted independence. With the Portuguese control coming to an end Zaire deployed armored vehicles and troops to help Roberto and the FNLA seize control of the country. The communist MPLA thwarted this. The MPLA was supported by a Cuban force and captured the Angolan capital.

Holden Roberto with a much larger force of Portuguese, South African, Zaire and FNLA troops launched an attack against the Cuban and MPLA forces on 10 November 1975. The attack was a disaster, and Roberto’s forces were routed. The FNLA and their allies suffered hundreds of casualties while the defenders lost only one soldier. The battle became known as the Road of Death such were the FNLA losses. The battle and the follow up saw the FNLA all but annihilated as they attempted to retreat to Zaire.

Holden Roberto and the FNLA continued to fight in the Angolan Civil War but were largely a spent force after 1976 due military defeats and the end of American funding for the group. In 1991, Roberto finally came to an agreement with his MPLA enemies that would see the FNLA lay down its arms and its forces allowed a return to Angola.

Holden Roberto attempted to enter Angolan politics but received little support during his run for the presidency, and parliamentary elections only provided modest returns. Roberto died in Luanda, Angola on 2 August 2007. He was seen by many as a key player in the African struggles for independence.