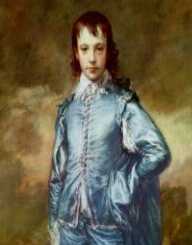 Thomas Gainsborough was an English artist who is best known for his portraits and landscape paintings. His best-known work is Mr. and Mrs. Andrews.

Thomas Gainsborough was born in Sudbury, Suffolk in England in May 1727. Gainsborough’s father was a wealthy weaver. Gainsborough practiced art as a child and had completed a self-portrait by aged ten. At the age of thirteen, he went to London to study art. Gainsborough worked on many projects in London during his training and practiced under the tutelage of Hubert Gravelot.

Thomas Gainsborough struggled in his early career as he failed to sell his landscape works. He turned to portrait work mainly for income. He primarily worked for local merchants and members of the middle class who wanted portraits of themselves and their families. Gainsborough moved to Bath in 1759 and was able to attract more upper-class clients. Gainsborough was also an early member of the Society of Arts and contributed works to their exhibitions.

Gainsborough would paint his landscapes at night by candlelight. He would draw from memory and use rocks and other materials to create a model of his subject. Despite his preference for landscapes, it was his portrait work that made Gainsborough famous during his lifetime, and it is his portraits that continue to attract the most attention in the art collection world. Gainsborough’s work became to be highly valued in the 19th century. In 2011, one of his works, Miss Read, was sold for six and a half million pounds at auction.

One of Thomas Gainsborough's brothers Humphrey was said to have contributed to James Watt’s steam engine.

Gainsborough married Margaret Burr who was the daughter of Duke of Beaufort from an extramarital affair. It was his wife’s wealth that allowed Gainsborough to survive in the early years of his career. The pair had two daughters, Mary and Margaret. Gainsborough contracted cancer and died on 2 August 1788. Gainsborough was interred at St Anne’s Church Kew at his request. The British royal family frequented the church.