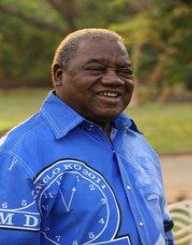 Rupiah Banda was born on February 13, 1937. He is a Zambian politician and also a former president of Zambia. He served as the president of Zambia from 2008 to 2011. He was defeated by the opposition leader Michael Sata who then became the president of Zambia. He was interested in politics while he was still a teenager and so he, later on, joined the Zambian African National Congress (ZANC), and that is where his political career started. He became famous in Zambian politics when he joined the United National Independence Party (UNIP) that was headed by Kenneth Kaunda.

Rupiah Banda also served as the vice president of Zambia with Levy Mwanawasa as president. He lost his presidential immunity because of accusations that he was corrupt.

Rupiah Banda was born on February 13, 1937, in Miko, Gwanda, Southern Rhodesia presently known as Zimbabwe. He was born to Bwezani and Sarah Banda who were Zambian migrants. His parents immigrated to Zimbabwe in search of job opportunities. He was raised in Zimbabwe where he got sponsored by a local Dutch Reformed Church preacher to pursue his education. He was later on sponsored by the family of B.R Naik who helped him financially as well and ensured that he received the best education. He became interested in politics at an early age because the Naik’s were political activists.

Rupiah Banda attended Munali Secondary School for his secondary education. He was an outstanding and bright student, and so he was loved by his teachers because of his willpower and commitment to studies. While still a student he joined the Zambian African National Congress (ZANC) which was headed by the late Harry Nkumbula.

Rupiah Banda joined the University of Addis Ababa, Ethiopia after he won a scholarship. He was an exemplary student in university, and so he received another scholarship from the International Union of Students to study Economic History at Lund University, Sweden. In 1964, he graduated with a Bachelors Degree from the Lund University. Politics was so much a part of Rupiah’s life that he left ZANC and joined United National Independence Party (UNIP) which was headed by his fellow youth Kenneth Kaunda. While at Lund University he acted as UNIP’s representative to Northern Europe. With his post, he secured a lot of scholarships for Zambian students. After his studies in Sweden, he returned to Zambia where he joined the National Institute for Public Affairs to take a course in Diplomacy and International Relations.

Rupiah Banda became an Ambassador to Egypt until 1967 as a diplomat. In April 1967, he became the Ambassador to the United States a post that he held until 1969. In 1969, he came back to Zambia where he was appointed the Chief Executive of the Rural Development Corporation. In 1970, he was appointed the General Manager of the National Agricultural Marketing Board. He was also appointed as the General Manager of the Rural Development Corporation a post that he held up to 1974.

Rupiah Banda ensured that he promoted agricultural development in Zambia. In 1974, he was appointed Zambia’s Permanent Representative to the United Nations in New York. He also served as the Chairman of the United Nation’s Council for Namibia. He also served as the Minister of Foreign Affairs in Zambia from 1975 to 1976. In 1978, he was elected as the Member of Parliament for Munali Constituency. In 2006, he was appointed as vice president by the late President Levy Mwanawasa. He was tasked with the responsibility of ensuring good relations with Zimbabwe.

In 2008, the late president Mwanawasa suffered a stroke, and Rupiah Banda became the acting president. In August 2008, the president died while hospitalized in Paris and he won the October 2008 presidential elections. Rupiah Banda served as Zambia’s president from 2008 to 2011. In 2011, he lost the presidency to opposition leader Michael Sata.  As president, Rupiah enhanced economic development in Zambia.

In 1966, Rupiah Banda married Hope Mwansa Makulu with whom he had three sons. Hope died in 2002 due to breast cancer. He was affected by the death of his wife greatly. He married his second wife Thandiwe who bore him a set of fraternal twins. He also had two sons from his relationships with other women other than his wives.