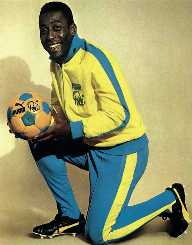 Edson Arantes do Nascimento was the name Pele was christened when he was born on the 23rd day of October 1940. His parents were Dona and Dondinho Celeste Arantes, and he was the firstborn of the family. His father also had a playing stint as a footballer. His parents also had another child. While growing up, Pele also went by the moniker. “Dico.” However, he assumed the name Pele when he consistently made a malapropos of the name “Bile” borne by his favorite football idol that played for Vasco da Gama.

Pele's family was poor as he grew up and he had to do the rounds by polishing shoes so that he can earn extra money to augment his family’s income. He had a knack for football and displayed such great interest in the game. At the age of eleven, Pele displayed such prowess that got the attention of one of his country’s football stars called Waldemar de Brito. It was Brito that took Pele to Santos, and he told the Directors of the club that the lad would become the world’s best football star.

By the time Pele turned 16, he had featured for his team in the first rated match he was playing with Corinthians FC on the opposite side. He was able to score a goal in this match.

The first professional match that Pele played was in September 1956 after he signed a contract in June. Over the next twelve months, Pele became a first-team player and emerged as the top scorer in the league. This was precisely how he got invited to the Brazilian national team.

Pele played against Argentina in his first international fixture for the national side in July 1957. Pele was able to slot in a goal against the Argentine side although his team lost 2-1. He also set a national record as the youngest football player to score in an international football fixture.

Playing for Santos in 1958 was an eventful one for the youthful Pele, and he helped his side triumph in the top-flight Brazilian league or the Campeonato Paulista. His goals during the season were a total of 58. However in the following year, Santos could not retain the championship, but in the succeeding year, they were back at the helm. Pele emerged the season’s top scorer once more. Over to 1962, the team won three championship events starting with the national league cup, the Taca Brasil as well as the South American club championship. Santos retained the Copa Libertadores in 1963 and also triumphed at the Intercontinental’, and the Taca Brasil Pele's contributions to his team dipped in 1965 to 1966, but he remained a bright soccer star that still held the world’s attention.

Pele was able to record the 1,000th goal of his career at the Maracana in 1969 with his goal against Vasco Da Gama. This was a penalty kick, and it was memorable. Pele played still at the club level till 1974 for Santos before heading into retirement. He lasted 19 seasons for his club with the 1974 one as the finale.

Pele was already a steady feature for his national side by 1958 and at the world cup; his contributions were of significant proportion.Pele notched six goals after four matches during this world cup run and set many records. When the 1962 World Cup came, Pele was worse off because of injury, and he could not play for the most part. Again at the 1966 event, Pele was at the receiving end of the Bulgarian aggression, and this led to an early exit for his team. By the 1970 game, Pele was in his prime, and he featured in the matches for his team and made it to the finals. His team scored a total of 19 goals during the 1970 event, and he had a hand in 14 of these goals. Brasil won the tournament and Pele was crowned as the “Player of the Tournament.”

Pele’s run in international fixtures ended in 1971 when he played against the team from Yugoslavia on the 18th of July at the Rio de Janeiro stadium.

Pele left the sidelines of retirement in the year 1976 to travel to America. The New York Cosmos signed him. Pele once again led the team to NASL championship in the year 1977. This was his finale with the club. Pele's last official match was played in 1997, in October. This match that held on the 1st day of the month was an exhibition match that saw Cosmos paired against Santos. Pele played for either side in both halves and scored against Santos via a direct free kick during the first half of the game. Cosmos emerged the match winner.

His parents named Pele after the scientific genius, Thomas Edison. Pele's total goal haul was 1,281 in 1,363 matches of different shades. In the year 1999, he was voted the Football Player of the Century. To date, Pele is revered indisputably as the most celebrated footballer of all-time. In the year 2016, a movie was made in his honor to chronicle his life and times.