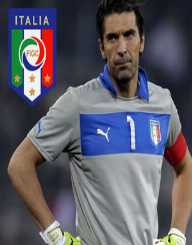 Gianluigi Buffon is an Italian goalkeeper and one of the outstanding in the world. Born on January 28, 1978, he is the captain of the Italian national team and the Serie A club, Juventus. Regarded as the greatest goalkeeper of all time, he is also the expensive goalkeeper in history. Gianluigi Buffon was transferred from Parma to Juventus for a fee of €52 million in 2001. Buffon has a fantastic and unbeatable record as the goalkeeper for the national team and Juventus.

He currently holds the record of keeping a clean post for 974 consecutive minutes over 12 league matches in the 2015-15 season. Buffon has won several trophies throughout his career. In 1999, he kept the post of Parma to win the Coppa Italia, SupercoppaItaliana, and the UEFA Cup. He has won several titles after joining Juventus in 2001 until now.

On the international scene, he holds the record of being the most capped Italian national team player. Buffon has been part of the Italian call-up for the FIFA World Cup five consecutive times, since 1998, 2002, 2006, 2010 and 2014.

Gianluigi Buffon was born on January 28, 1978, to Maria Stella and Adriano in Carrara in Italy. His parents were both athletes, with his mother being a discus thrower and his father a weightlifter. Buffon’s family is full of athletes as his two sisters, Guendalina and Veronica also played for the Italian national volleyball team. Coming from a family of athletes, Buffon had a love for sports from childhood.

Gianluigi Buffon started his football career at age 113 with the Parma youth system. He had to reject offers from Milan and Bologna to join the team. He started as an outfield player, playing as a midfielder. The spectacular performance displayed by his icon Thomas N’Kono during the 1990 World Cup inspired him to switch to goalkeeping. He also had all the attributes and physical features that can make him a successful goalkeeper. Buffon had the chance to keep the post when both goalkeepers of the Parma youth team suffered injuries. He performed very well with his new position and within two weeks, gained promotion as the first keeper.

In 1995, he was promoted to the senior team and made a Serie A debut for Parma at age 17. With his performance, he became the first choice goalkeeper for Parma in the 1996-1997 season. That season, Parma placed second in the in the Serie A and qualified for the UEFA Cup. He made his European debut in 1996 at age 18, in a 2-0 defeat to Vitoria de Guimaraes. In the 1997-1998 season, Parma qualified to the UEFA Champions League, and Buffon made his Champions league debut that season. During his fourth season with the club, he helped Parma to win the UEFA Cup and the Coppa Italia. He also helped the team to win the SupercoppaItaliana.

Gianluigi Buffon moved from Parma to Juventus on July 3, 2001, at a world-record fee of €52million (100 billion lire). The fee included the transfer of Jonathan Bachini to Parma. The transfer made him the most expensive purchase by Juventus. This record was broken by Gonzalo Higuaín in his 2016 transfer from Real Madrid to Juventus. He replaced Edwin van der Sar and handed the number 1 shirt. He made his debut for Juventus on August 26, 2001, at the beginning of the 2001-2002 season. On September 18, he made a Champions League debut for Juventus in the 3-2 win over Celtic. Buffon was in his best element for Juventus until the Calciopol incident that saw Juventus being relegated to the Serie B.

Calciopoli And Return to Serie A

Juventus was relegated to Serie B with point deduction and two titles stripped. However, Gianluigi Buffon stayed with the team and brought it back to the Serie A in the 2007–08 season. From that season until the 2011-2012 season, Buffon struggled with injuries and played fewer matches. He has since won several trophies with Juventus until now.

Gianluigi Buffon started his international career at the youth level. He started with the under 16 to 23 and in the Olympic team. He had his first call-up to the senior team at age 19 and nine months on October 29, 1997. He made it to the 1998 World Cup in France as a third choice keeper.  He has never looked back since and has kept the post several times for the Italian national team. He was in post when Italy won the 2006 World Cup. Gianluigi Buffon was made the captain of the national team in 2011. His first match as a captain was a 1:1 friendly match game between Italy and Germany.

Gianluigi Buffon announced his retirement from the national team after Italy failed to qualify for the 2018 World Cup. Despite announcing his resignation, he was called up for the friendly match between Italy and Argentina in March 2018.

Gianluigi Buffon has married twice, first in 2011 to Alena Seredova, a Czech model. The two had dated since 2005. Buffon and Alena had two children Louis Thomas and David Lee. Three years into their marriage, the couple divorced in 2014. Gianluigi Buffon moved on to date an Italian sports journalist and TV host, Ilaria D’Amico. The two have a son Leopoldo Mattia. In 2017, Buffon and D’Amico were engaged. Buffon had previouslyVincenza Cali, a sprinter in the Italy national athletics team.

The Italian version of his autobiography, Numero 1, was out doored on November 14, 2008. He holds 15% shares in the Italian textile company, Zucchi Group S.p.A. He has a brand of win called Buffon #1.

Gianluigi Buffon has won a lot of titles and awards in his career. He has won numerous Serie A titles with Juventus. He has won Coppa Italia, SupercoppaItaliana, the FIFA World Cup in 2006, a bronze medallist at the UEFA European Championship and many others. On individual awards, he is a five-timeSerie A goalkeeper of the year, UEFA Club Footballer of the Year, 2002-2003 and UEFA Club Goalkeeper of the Year, 2002-03 and 2017-2017 among many others.