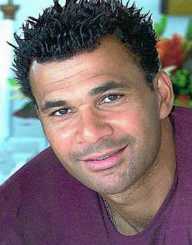 One of the greatest footballers of his time, Ruud Gullit featured in Pele’s top 100 footballers of all time list. He played as an attacking midfielder for the famous Italian club A.C. Milan. He was also instrumental in taking Hungary to the semifinals of the World Cup football in 1992. While capable of playing at all positions, he has mainly played as a forward and an attacking midfielder.

Ruud Gullit was born on September 1, 1962, in Amsterdam, Netherlands. His father, George, was a school teacher who taught economics and his mother Ria Dil was a museum worker. But such a humble background did not stop Gullit from developing an interest in football and taking up soccer as a career.

Ruud Gullit showed his interest and skill in football at an early age and was selected for the Dutch Youth System while playing for AFC DWS. He improved his skills while at the DYS, and at 16 years of age, he was ready to make his debut for HFC Harlem.

When Ruud Gullit joined the HFC Harlem, the club was on a downfall. With his spirited and skillful gameplay, he took the club to new heights. They first reclaimed their spot on the Dutch first divisions and then went to the European competitions. Gullit stayed with the HFC Harlem for three years.
In 1982, Gullit joined the club Feyenoord and helped them win the league. After three years at Feyenoord, he changed his club again and joined the PSV Eindhoven in 1985.

The career with A.C. Milan

Ruud Gullit's career climbed up even further when A.C.Milan bought his services for a record fee in 1987. He stayed six years there, and played in the attacking midfield position. While playing for the A.C.Milan, Gullit took them to several trophy wins.

In 1990, Ruud Gullit participated in the World Cup. But due to his knee injuries, he couldn’t contribute much to the cause of his team, and they were kicked out in the second round. He featured in the team again in 1992, and this time the Dutch team went into the semi-final. Gullit’s contract with A.C.Milan ended in 1993.

After leaving A.C.Milan, Ruud Gullit went to play for Sampdoria and led them to victory in the Italian Cup. In 1995, he was the player manager of Chelsea. Gullit’s football career declined after this. He got into several disputes with the team management which affected his career. He was relieved of his duties while managing small clubs several times.

Ruud Gullit then turned his attention to interviewing celebrities, and has done well since then.

Ruud Gullit has been married three times. His first marriage was to Yvonne de Vries in 1984. The marriage lasted seven years and the couple produced two daughters Charmayne & Felicity. His second marriage to Cristina Pensa also ended in a divorce. She bore him two children – Sheyenne and Quincy. With his third wife Estelle Cruyff, he has two children – Maxim and Joelle. Like his previous marriages, this one also failed.