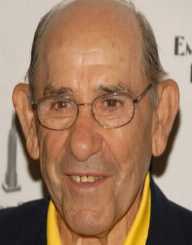 Lawrence “Yogi” Berra was born on May 12, 1925, in St. Louis, Missouri, USA. His parents were Pietro and Paolina Berra. He had four siblings; John, Josie, Mike, and Tony.

Yogi Berra was born into a family of Catholic Italian immigrants. His family struggled to make enough money to support themselves, but Yogi managed to have a somewhat normal childhood. He loved to play baseball with his friends, as well as playing other games. However, his childhood did not last long, as he had to drop out of school in middle school and begin working so he could help to support his large family.

Yogi Berra began his baseball career when he was only 14 years old. He played on a youth league, which was funded by the American Legion. His skills were obvious from the star, and in 1942, when he was still a teenager, he was offered a spot on the St. Louis Cardinals team. However, he turned down the offer, as they did not offer much money. In the same year, he instead signed onto the New York Yankees team, which was willing to pay him all the money he wanted, which was only $500. However, he had to take a break from baseball in the early 1940’s, as he went to Europe to fight in World War II.

Yogi Berra entered the military in 1943, only a year after his professional baseball career had begun. He was in the United States Navy. He was an exceptional soldier, who even took part in the D-Day landing in Normandy. Yogi Berra left the navy in 1946 after World War II had ended.

Yogi Berra is most famous for playing with the New York Yankees, which he signed back onto in 1946, after completing his tour in the United States Navy. On the team, he played with other famous baseball players, including Mickey Mantle. He was only an average batter, having a batting average of .285, but it was his skill in catching balls that made him valuable to his team. Along with his teammates, Yogi Berra helped his team to win 10 World Series Championships and 14 American League Championships during his career.

Yogi Berra was humble, even though he was great. He saw himself as an average baseball player, although others would argue that he was one of the most beloved baseball players there ever was. After Yogi Berra retired from baseball, in 1963, the Yankees paid him respect by retiring him #8 jersey, meaning that no other player on the Yankees team will ever use that number.

In 1964, only a year after retiring from Baseball, Yogi Berra became the manager of the New York Yankees. He helped to win many games, but the team eventually lost to the Cardinals, which ended up costing Yogi Berra his job as manager. This loss did not ruin his love of baseball. In 1965, he signed on to be the player-coach for the New York Mets.

He did this until 1975 when he was fired. After being fired, he worked with the New York Yankees again, this time as the team’s coach. While coach, he led the team to two victories in the World Series. Yogi Berra was promoted to team manager in 1984 but was fired again in 1985. The next year, he became the coach for another team, the Houston Astros. He did not get fired from this job, and instead worked with the team until he retired in 1992.

Yogi Berra earned the Major League Baseball All-Star Catcher award 18 times during his career. He also was the American League MVP three times. Yogi Berra won the Slocum Award, given to him by the New York Baseball Writers Association, in 1967. He was inducted into the Baseball Hall of Fame in 1972. He was given an honorary doctorate in 1996 from Montclair State University. The university also has a baseball stadium named after him.

Yogi Berra received the Presidential Medal of Freedom for his military service, work for supporting LGBT+ rights, and of course, for his impressive baseball career. The award was given in 2015, two months after his death.

After retiring from baseball, both as player and coach, Yogi Berra focused on giving to others. In 1998, he founded the Yogi Berra Museum & Learning Center. At the center, he puts on baseball camps, as well as other sports activities, for children to learn more about sports, as well as to get them some exercise, and to help them meet children with similar interests. He helped to fund these programs by throwing celebrity golfing contests.

Yogi Berra married a woman named Carmen in 1949. The couple had three children together, all sons, named Dale, Tim, and Larry. The couple was married until Carmen’s death in 2014. After her death, Yogi Berra did not remarry

Yogi Berra died of natural causes on September 22, 2015, in New Jersey. He was 90 years old when he passed away.