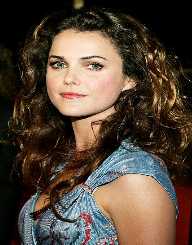 American actress Keri Russell was born on the 23 March 1976 in Fountain Valley, California to Stephanie Stephens and David Russell. She has two siblings.

In 1991 as a young performer Keri Russell appeared in The Mickey Mouse Club, the Disney children’s show alongside Britney Spears, Ryan Gosling, Christina Aguilera and Justin Timberlake. Other early appearance was in Honey; I Blew Up The Kid (1992) and Malibu Shores (1996).Her breakthrough television role was in Felicity.

Keri Russell’s breakthrough role was playing Felicity Porter in the title role about a young woman who followed her heart to New York City. She impressed with her portrayal of the earnest young woman and in 1999 won a Golden Globe. Felicity ran for four years, and after it had finished, Russell moved to New York City. Her next role was appearing alongside Mel Gibson in We Were Soldiers. Then in 2005, she was on The Upside of Anger, The Magic of Ordinary Days and the television miniseries Into The West.

Keri Russell starred alongside Tom Cruise in Mission Impossible (2006), and next played the part of an unhappy pregnant waitress using her cooking skills to improve her life in Waitress (2007). Waitress debuted at the Sundance Film Festival to rave reviews, but the event was marred by sadness because the writer and director Adrienne Shelly had been found hanging in her apartment in New York City. She was a victim of murder by a construction worker who was subsequently arrested and sentenced to twenty-five years in jail. Russell next film roles were in August Rush (2007), Bedtime Stories (2008), Lemmon of Grass (2009). She was also in the television series Running Wilde (2010) co-starring with Will Arnett.

As a young actress in 1993, Keri Russell was nominated with the cast of The All New Mickey Mouse Club. Since then she has won numerous nominations. Her performance in The Americans (2013) won her a Primetime Emmy Award in 2016 as well as Golden Globe for best performance by an actress in a television drama.

Keri Russell married Shane Deary in 2007, and they had two children before the relationship ended in 2013. She is currently in partnership with Welsh actor Matthew Rhys, and they have a son.