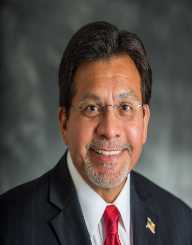 Alberto R. Gonzales is an American lawyer who served as the 80th US Attorney General under President George Walker Bush administration.

Alberto Gonzales was born to poor Mexican immigrants on August 4, 1955, in San Antonio, Texas. He grew up in Houston as the second child of Pablo and Maria Gonzales. He had seven other siblings in the family. Gonzales was raised up under strict Roman Catholic rules as all the children within the family. Living in a two bedroomed house, the family crammed in the small house without running water.

He went to MacArthur High School. He graduated from high school with honors of joining the university. Due to his poor background and lacking a scholarship, he joined the US military. He served in the US Air Force while studying at the US Air Force Academy. He transferred to his credits to Rice University situated in Houston. He finished his studies at the university’s Lovett College with a Political Science degree in 1979. In 1982, he graduated with a Law degree from the Harvard School of Law.

He joined a legal firm in Houston called Vinson and Elkins. He handled corporate cases within the firm’s clientele. As the first Hispanic partner in the office, Gonzales got much attention for his origins and legal abilities. In 1994, he became the attorney of the Texas Governor George Bush. Three years later he became an executive member of the Texas state administration. Gonzales was appointed as the Texas Secretary of State. In 1999, Governor Bush appointed him to serve as a Texas State Supreme Court.

As the Texas State Counsel, Gonzales reviewed the death row sentences himself and advised the governor on the proceedings. Clemency pardons from the governor had to pass through the Texas Board of Pardons and Paroles. The board then deliberated and if satisfied proceeded with a majority vote to uphold the pardon. Under the Bush-Gonzales partnership, the Texas state had more executions than any of the other states in the US.

In 2001, George Walker Bush became the US president. He called his erstwhile ally Gonzales to Washington D.C. Gonzales distinguished himself as an ardent supporter of the Bush anti-terrorism policies. He participated in the formulation of the legal framework for the Bush administration fight against terror.

Gonzales approved the use of torture on suspected terrorists. He supported the depriving of constitutional and human rights for detainees at Guantanamo Prison. Gonzales called for the waiver of the Geneva Convention rights to any of the terror suspects against the US. He supported the so-called war on terror even before conclusive evidence against Afghanistan and Iraq came out.

President Bush nominated Gonzales to replace John Ashcroft as the US Attorney General. Despite his far-right conservative stance, Gonzales received much support from across the political divide. His proponents described him as forthright and honest with his friends and foes alike. On February 3, 2005, Gonzales received a resounding confirmation of 60 votes in favor including 6 Democrat Senators.

His conservatism came back in 2007. The US Congress instituted a judicial process to investigate the due process in the sacking of 8 federal prosecutors. In the investigation, allegations of political witch-hunting surfaced. He was put on the task on his previous testimony on the role he played in the Patriot Act. The act gave the executive more powers to electronically access any emails and telephone calls of US citizens.

Gonzales became besieged under increasing congressional pressure from across the political divide. In August 2007, he resigned from office. He vacated the office in September 2007. He was succeeded by former US court judge Michael Mukasey.

Gonzales went back to legal practice joining Walter Lansden Dortch & Davies law firm in Nashville. In 2009, he was hired by the Texas Tech University and Angelo State University. He became the political science professor in both universities. He joined Belmont University as a law professor in October 2011. He also authored some books and wrote academic editorials on politics in academic journals in the US.

He has served on advisory boards in government agencies and other large corporates. An example is the energy Task Force which he served on an advisory basis under President Bush.

Gonzales has three sons from his two marriages. His first marriage to Diana Clemens ended in divorce in 1985. He lives with his present wife Rebecca Turner.

Alberto Gonzales came from the ashes so to speak. With nothing but education, determination, and ambition, He climbed up the ladder in society. He became the first Hispanic to serve in high offices both in Texas and the US.

His asset became his downfall. Gonzales is known for his uncompromising stand in decision making. He is always open on what he believes and walks the talk. The same openness became his downfall as he attracted severe criticism for his stand on the handling of terrorism in the US.

As the US Attorney General, he made history as the first American of Hispanic origin to serve in a high executive position in the history of the US. Despite his acrimonious fall out with Congress, Gonzales still remains one of the staunch reformers of the US society when terrorism struck the American society.