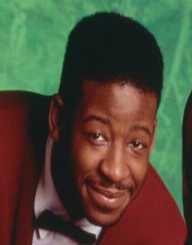 Wanya Morris is an American R&B singer. He is a part of the famous R & B band Boyz II Men who took the world of music by a storm in the 1980s. He is also renowned for his romantic relationship with the singer Brandy Norwood.

Wanya Morris was born on July 29, 1973. His birthplace is Philadelphia, the U.S. and his full name is Wanya Jermaine Morris. Morris’s star sign is Leo. Morris’s parents are Carla Morris and Dallas Thornton. He has three siblings. He didn’t have a very happy childhood as his parents separated when he was very young. Morris chose music to hide his pain and started singing which eventually led him to a career in music.

Wanya Morris went to the Philadelphia High School where he studied Creative & Performing Arts. It was here that he first formed the band Boyz II Men with his classmates Nathan Morris and Mark Nelson. Two more people Shawn Stockman and Michael McCary joined in to complete the band known as Boyz II Men. They began performing at local shows when Morris was expelled from the school. He later finished his education at the Willingboro High School.

For most of his professional career and music, Wanya Morris's name is associated with his band Boyz II Men. He also has had moderate success as a solo artist, but he is most famous as a band member of the legendary R&B group.

The band of five released their first album titled Cooleyhighharmony in 1991. It has been certified 9X Platinum so far selling over 9 million copies in the US alone. The band had immense success with the release of this album. After a short falling out, when Nelson quit, the band was reduced to four members. Their single Motownphilly reached the #3 spot on the pop charts. The band then went on to record some hit songs and swayed the crowd of the early 1990s.

The song It’s the End of the Road reached the peak of the pop charts and stayed there for 13 weeks consecutively. It also won the Grammy Award for the Best R&B Performance by a duo. The song On Bended Knee came out in 1994 and reached the #1 spot on the Hot 100. The song previously there was also recorded by Boys II Men and was titled I’ll Make Love to You.

In 2013, Wanya Morris did The Package Tour with other bands including New Kids on the Block and 98 Degrees.

Although Wanya Morris's talent was recognized as a solo artist, he didn’t have the same amount of success in his solo career. A compilation titled Millenium Renaissance was released in 2000. In 2007, he also produced a mixed tape Unreleased.

In the 90s Wanya Morris was dating singer Brandy after they got close while touring together. She wasn’t legally an adult at the time, and Morris faced some criticism. He has also dated Lisa Left Eye Lopes. He married a designer named Traci Nash and lives with her & their children in New Jersey.