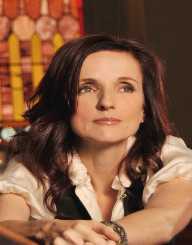 Patty Griffin is an American singer-songwriter who has received a Grammy Awards for her music and has been nominated seven times. She was hailed as the Artist of the Year in 2007 by the Americana Music Association.

Griffin's songs were covered by a lot of famous artists such as the Dixie Chicks, Linda Ronstadt, Martina Mcbride, Miranda Lambert, and Kelly Clarkson.

Patricia Jean Griffin was born on March 16, 1964, in the Old Town of Maine, United States. She was the youngest of 7 children. Unlike most musicians, Griffin did not have any special inclination towards music nor did she aspire to become a singer.

However, she started to develop an interest in music at the age of 12. She drew inspiration from her mother and cited The Staple Singers, The Beatles, and Aretha Franklin as her musical inspirations. During her teenage years, he started to pursue music when she bought a $50 guitar at the age of 16 and started making her compositions.

Patty Griffin married Nick Cobb in 1988, but their marriage did not last long and ultimately ended in divorce after six years in 1994. She decided to focus on her music while working as a waitress in local coffee shops around Boston while doing gigs at said coffee shops.

Griffin's chance at becoming a professional singer came through when she was performing one of her local gigs at the coffee shop and got scouted by a representative from A&M Records.

They chanced upon the future singer's demo tape and signed a contract with her. She went and recorded the demo with a stripped down version of which resulted in the release of her 1996 debut album entitled Living With Ghosts followed by her second album release in 1998 called Flaming Red. She continued to produce more albums which were well-received but did not garner enough attention to raise her popularity.

Patty Griffin continued to produce more albums at A&M Records but left and moved on to ATO Records. It was here where she produced her 2007 album Children Running Through which entered the Billboard 200 hit charts. This album also won Griffin her first AMA Award for the 2007 Album of the Year and Artist of the Year.

In 2009, she had the fortune to work with Mavis Staples, the vocalist of The  Staple Singers, and one of her musical inspirations. They worked together on the song Waiting for My Child to Come Home which is included in the album Oh Happy Day and won a 2010 Grammy Award for Best Gospel Album.

Her work on Oh Happy Day prompted the recording of her 2010 album Downtown Church. The album was made up of religious songs which won her the 2011 Grammy Awards for Best Traditional Gospel Album. She was also the recipient of the 2011 Inspirational Album of The Year bestowed by the Dove Awards.

Aside from Mavis Staple, Patty Griffin also worked with other artists such as Joshua Radin, Todd Snider, and Dierks Bentley. She was featured on Robert Plant's 2010 album Band of Joy and was also a part of his US Tour and served as a backup vocalist. Both Plant and Griffin were then linked romantically but separated in 2014.