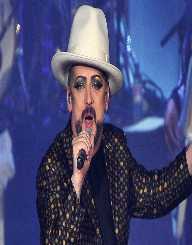 Boy George was born on June 14, 1961, in Bexley, England,United Kingdom. His parents are Dinah and Jeremiah O’Dowd. He has five siblings: David, Gerald, Kevin, Richard, and Sioban. Around the 1980’s he started to go by the stage name Boy George, which is the name that he is best known for now.

As a youth, Boy George attended Eltham Green School. However, he often misbehaved in school and did not conform to the school’s dress code. Because of his actions, he was expelled from school before he could graduate.

After school, Boy George continued to dress oddly (for the time). He dressed in both men and women’s clothing, and he often wore makeup. His family did not approve of this, but this does not mean that everyone hated his style. One man who loved his style was Malcolm McLaren. After meeting him, Boy George was invited to join the band Bow Wow Wow.

A short time after joining Bow Wow Wow, Boy George decided to make a band of his own. He joined up with Jon Moss, Mikey Craig, and Roy Hay to make the Culture Club. The band soon released their first album in 1982 called Kissing to be Clever. On this album, they performed the song, Do You Really Want to Hurt Me? which would later go on to be one of their most famous songs. Other songs on the album also helped to make them into a hit band.

The Culture Club’s second album came out in 1983. The album came out so quickly in part because of the success of the band’s last album. This album was called Colour By Numbers. One song of the album, Karma Chameleon, a pop favorite even today, helped to boost sales of this album.

The band’s third album came out in 1984 and was called Waking Up with the House on Fire. Sadly, this album was not received well by fans. Soon after, in 1986, the band released its fourth album called From Luxury to Heartache. This album hardly had time to shine before complications with the band members distracted from the album. It was around this time that Boy George admitted he was addicted to drugs and that a band member, Michael Rudetski, was found dead in George’s home with the cause of his death being a heroin overdose. After this, the band broke up for several years.

After the Culture Club broke up, George started to work on his solo career. His first solo album, Sold, was released in 1987.  In the following two years, he released three more solo albums: Tense Nervous Headache, Boyfriend, and High Hat.

In the late 1980’s through the early 1990’s, Boy George worked on starting his music record label called More Protein. While this company never got “big,” the group did release many underground pop albums. He even produced many f his albums with his own record company. Some of the artists that produce with this record company include Amos, Eve Gallagher, Various, Colein, and E-Zee Possee.

In 1990, Boy George began working with Blue Radio on the Power Satellite channel. He worked with his group until 1991.

Boy George didn’t release his next solo album until 1995. Instead of singing pop, he tried his hand at rock n’ rock with his album, Cheapness, and Beauty. The new style didn’t work for him, at least, that’s what the critics and fans thought. The album did not sell well.

In 1998, the Culture Club got back together for a reunion tour around the UK. The band also recorded new songs together, and made another album: Don’t Mind If I Do, which came out in 1999. The band then toured together to promote their new album.

In 2002, Boy George released another solo album: U Can Never B2 Straight. This album was a smash hit. In the same year, he went on a 20th-anniversary tour with the Culture Club.

In 2007, George began releasing electronic dance music. Some songs were new, while others were old or remixed. This collection of music did fairly well.

In 2011, George performed two live concerts with the Culture Club.

Boy George released his most recent album, Coming Home, in 2013. This album was released electronically and sold very well.

Boy George is expected to become a mentor on The Voice (UK).

Throughout his long musical career, Boy George has won some awards. Below is a list of awards that the Culture Club earned while he was in the band.

Boy George was addicted to various drugs throughout his music career. However, it was not until the mid-1980’s that he admitted he had a problem. Some of the major drugs he was addicted to were cocaine and heroin. Later in the same decade, Boy George began to take narcotics to ease his addiction. Sadly, he only became addicted to the pills instead. Over the years, he has been arrested several times for drug possession and usage.