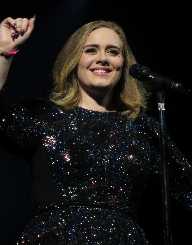 Adele is an English singer and songwriter.

Adele Laurie Blue Adkins was born in Tottenham, London, on 5 May 1988. Her father, Marc Evans left her and her mother in 1991 when she was three years old. Penny Adkins was left to raise Adele in London. Adele was fifteen when she discovered Etta James and Ella Fitzgerald, inspiring her to venture into music.

Even though she was a bright student, Adele was not enjoying her traditional education. Hence her mother Penny enrolled her in BRIT School for Performing Arts & Technology in Croydon. Adele was fourteen when she went to BRIT. She had classmates Leona Lewis and Jessie J, and she graduated in May 2006. Upon graduation, she was more interested in helping people launch their music career.

During her studies at BRIT, Adele wrote “Hometown Glory” in 2004, using West Norwood as the subject of her song. She also recorded a three-track demo for a class project, and her friend posted it on Myspace page. Four months after graduation, she was approached by XL Recordings and signed the contract.

In 2006, Adele provided vocals for Jack Peñate's song, "My Yvonne," she met producer Jim Abbiss there. He would be the one to produce much of her debut album, 19, and tracks on 21. Adele made her television debut in 2007, performing "Daydreamer." Her first single, featuring the breakthrough song, "Hometown Glory," was released three months after her debut.

Adele's debut album, 19, went on sale in early 2008. 19 was her age when she began the project. 19 was classified blue-eyed soul, led by "Hometown Glory" and "Chasing Pavements," Adele found fame, embarking on a short North American tour. Soon she found fame in both America and British soil. She released 19 through Columbia records in the United States.

In 2011, she released another album 21, her age at the time of recording. The album earned her two Top 5 singles and a pair of Top 5 records in the same week, only the Beatles and 50 Cent achieved that milestone before her. Adele also displaced Madonna’s Immaculate Collection for consecutive weeks atop the album charts, for the solo female artist.

Adele was forced to cancel two tours in her “Adele Live” Tour due to vocal-cord hemorrhage. She had laser microsurgery to remove a benign polyp at the Massachusetts General Hospital in Boston on November 2011. Adele wrote and recorded the theme song for Skyfall, the 23rd James Bond film. The song “Skyfall” was a collaboration with producer Paul Epworth. The song was recorded at Abbey Road Studios and features orchestrations by J. A. C. Redford.

In 2015, Adele released her third album “25”. She called it her break-up, or make-up record, citing life happened. At the same time, “Adele Live 2016” tour was announced, starting in Europe and ending at Wembley Stadium, London on July 2017. The 2016 tour will also include Australia as a part of her world tour.

Adele had a good relationship with the father until her teens when her father spiraled into alcoholism after the death of her mother. They later reconciled with a friend.

Adele had drinking problems, fueled by heartbreak. She was so drunk once that she fell off a stool and forgotten the words to her song, during her first tour. Adele also credits being drunk a reason why her album 21 was a hit. After getting pregnant, she quit smoking and drinking.

Adele gave birth to a son on October 19, 2012. Her son, Angelo’s father, is Simon Konecki. They are long-term partners with rumors that they are married. She intends to take a ten-year break to look after her son Angelo.

Politically, she is a Labour supporter.

Adele is a significant contributor to MusiCares, a foundation for musicians in need. She has a requirement that all backstage visitors donate a minimum of $US 20 for UK Charity SANDS. Adele also supports many charities including Mencap, Keep A Child Alive and LGBT events.

Both 21 and 25 have been certified diamond by the Recording Industry Association of America (RIAA). Adele has won Grammy Awards and Academy Award for the song “Skyfall.” It is the first and only James Bond theme song to win the award.

In Ivor Novello Awards, Adele was named Songwriter of the Year. She also was appointed Most Excellent Order of the British Empire for service to music, receiving the award from Prince Charles. Adele also won other awards like BRIT and Billboard Top.