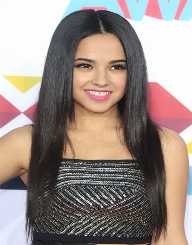 Rebecca Marie Gomez was born on March 2nd, in 1997. She popularly goes by the name Becky G. She is famed for being a Mexican-American singer, model, rapper and a talented actress. She earned herself high acclaim following the videos that she uploaded to the internet. These videos featured Gomez singing various songs. Due to the recognition that she earned, she captured the attention of Dr. Luke, a producer. This was followed by a record producing deal alongside RCA Records and Kemosabe Records. Gomez was lucky enough to collaborate with notable personalities such as Cher Lloyd, Cody Simpson and will.i.am.

Rebecca Marie Gomez was born on March 2nd, 1997. Her place of birth was in Inglewood in California. Her father’s name is Francisco "Frank" Gomez while her mother is called Alejandra Gomez. Marie Gomez has got three other siblings namely Frankie, Alex, and Stephanie. At the time of her birth, her parents were financially crippled and that they struggled to maintain their home. At some point, her family was burdened, and they had to shift to her grandparent’s garage.

Gomez stepped in to help her parents out of the financial difficulties. As a result, Gomez worked part-time as she featured in some commercials while at the same time landing voice-over roles.

Gomez rose to the spotlight of her career after releasing the hit single “Becky from the Block” in 2013. Another hit song that also earned her nationwide fame was the “Play it Again.” This song was also released in 2013. The following year, she hit the headlines with the release of “Shower.” The song was ranked among the top 20 in the Billboard Hot 100 rankings. This was a major hit for her as the Recording Industry Association of America – RIAA gave it a platinum certification.

Sooner or later, Gomez was out on the streets again with the release of “Can't Stop Dancin” – 2014. This was followed by "Break a Sweat" in 2015. In 2016, she partnered with Pitbull in the release of “Superstar.” During the same year, she released “Sola.” This marked her debut Spanish single.
Behind the Curtains

Regardless of being famous right from a tender age, Gomez maintains her humble personality all through. She loves traveling and hence takes time to tour different places. Just like any other common girl, she helps her parents with household chores when she is away from the cameras.

Gomez has been actively dating, and recently she broke up with Austin Mahon, a famous singer, and a songwriter. They had been dating each other for about five months. Recently, in 2016, she announced that she was seeing Sebastian Lletget.