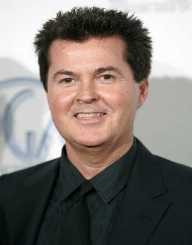 Simon Fuller’s family were living in Hastings, East Sussex, UK when he was born on the 17th May 1960. He has two siblings, Mark and Kim. His father was a pilot in the RAF, and the family spent some time in Cyprus, and later in Ghana.

Simon Fuller and Natalie Swanston were married under an old oak tree in the Napa Valley, California in 2008. In November 2010, the couple announced the birth of their first child, a daughter.

Simon Fuller is a celebrity manager and entrepreneur with a genius for creating television shows which appeal to worldwide audiences. He started out his career at Chrysalis where one of his early successes was with Madonna’s hit Holiday (1981). Later, in 1985, he founded 19 Entertainment. He was by then managing musicians as well as sports stars. Clients included David and Victoria Beckham, The Spice Girls and Annie Lennox.

19 Entertainment was responsible for discovering Amy Winehouse and arranging her contract with Universal Music. In 2003, Fuller equaled Brian Epstein’s record, of having three artists on the US singles charts. During 2010 he had started XIX Entertainment. By 2012, he worked with Chris Blackwell, founder of Islands Records on the Blackwell Fuller project and around the same time was working with H&M on a brand of clothing.

By 1999, Simon Fuller started focusing on television. His first show was the S Club 7. Fuller’s next stroke of genius was his television show Pop Idol which its debut on 6 October 2001. The original show’s winner was Will Young, and his song Anything is Possible was a hit. Fox in the United States picked up the show and within a short period, was one of the highest rating shows on American television. 19 Entertainment was sold to CXX Inc (2005). Fuller became a director of CXX, and this ensured that he had creative control.

The international franchise includes Australian Idol, Arab Idol, Indian Idol and Idol (South Africa) and Idols (Pakistan) and many others. Pop Idol UK ran for only two seasons, but it led to 19 Entertainment and the global Idol franchise which now controls numerous versions in over a hundred countries.

The term Pop had to be dropped after a legal battle with the owners of Popstars.

A dispute arose when Simon Cowell launched his show, The X Factor. Cowell had been a judge on the first series of Pop Idol. (He had helped Fuller to pitch the show to ITV.) Simon Fuller started legal proceedings because he felt that Pop Idol’s format had been extensively copied. The case was settled in November 2005. The result being that Simon Fuller was made a fifty percent partner of the X-Factor. Simon Cowell, in turn, had to agree to continue judging on American Idol for at least five more years. Cowell was an American judge up until 2010; then he switched to The X Factor USA in 2011.

Another controversial issue was that the owners of Popstars won a legal battle which forced the word Pop to be removed from Pop Idol.

So You Think You Can Dance

Simon Fuller developed this dance competition reality show with Nigel Lythgoe. The show debuted in 2005. There have been over twenty-five versions of the show around the world.

Fuller launched 19RM, a fashion business with designer Roland Mouret. Their first store was in London, and the two have collaborated for many years. In 2007, Simon Fuller took a collection to New York Fashion Week. In 2009, he became the majority shareholder in Storm Model Management. The same year he teamed up with Sojin Lee, an ex Net-a-Porter-buyer, and launched an online publication, Fashionair. He was also involved in the launching of the David Beckham brand of clothing.

One of Simon Fuller's earliest success was working with Madonna, Annie Lennox, and the Spice Girls. He then shot to world prominence with his Pop Idol and the subsequent global Idol franchise. So You Think You Can Dance was also a highly rated show.

Simon Fuller has won many awards. In 2007, Time magazine featured him on their list of the hundred most influential people worldwide. Billboard magazine named him as the most successful manager of musicians of all time. Fuller has received a star on the Hollywood of Fame.

In 2014, The Anglo-American Cultural Award was presented to Fuller by the British Ambassador in the United States. The award was for his success as a British entrepreneur working in North America. He was awarded a doctor of letters from the University of Brighton in 2014.

There were reports that Simon Fuller was teaming up with Abba for a reunion event in 2018.