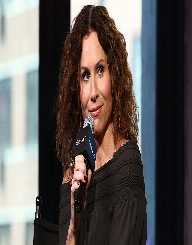 Minnie Driver was born 31st January 1970, to Charles Driver and Gaynor Churchward. She was born in Marylebone, London, England. Her father was the director of an investment company, her mother is a fabric designer, and former model.

Her parents weren’t married, and they separated when Minnie Driver was six years of age. Driver has an older sister and two younger half-brothers. She went to boarding school in Hampshire and went on to study at the Webber Douglas Academy of Dramatic Art, and Collingham College in Kensington.

Minnie Driver debuted on television in the 1990 movie, God on the Rocks, and followed this up in 1991 by appearing on episodes of television series, The House of Eliott and Casualty.

As she continued to appear in episodes of different television shows, she also started acting in movies.

Her first movie was a short film in 1992 called The Zebra Man.

Driver's breakthrough role came in 1995 when she starred in Circle of Friends. She appeared in many movies over the ensuing years, including, Sleepers (1996), Good Will Hunting (1997), and Tarzan (1999).

Between 1992 and 2018, she has appeared in nearly 45 movies, showing how prolific her acting work is.

As well as acting, Driver is a talented singer and songwriter. She has released three albums. The first was, Everything I’ve Got in My Pocket (2004), the second, Seastories (2007), and the third, Ask Me to Dance (2014).

Driver's music career began while she was still in school. She joined the Milo Roth Band, and at 19, she had a recording contract. In 2001, she signed with EMI and Rounder Records. She wrote almost all the songs on her first album and did have some chart success with her single, Everything I’ve Got in My Pocket, with the song reaching number 34.

2004 saw  Minnie Driver take a part in the stage production of The Phantom of the Opera.

Minnie Driver has been nominated for 24 awards and has won six of them. Her wins include three awards for her role in the movie, Take, in 2007.

Minnie Driver had a short-term relationship with Timothy J. Lea, a writer, and producer for television. The relationship gave birth to her son, Henry, in 2008.