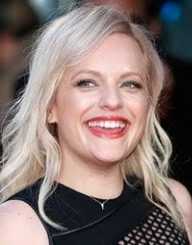 Golden Globe and Emmy Award-winning American film, television and theatre actress Elisabeth Singleton Moss was born on July 24, 1982, in Los Angeles, California, United States of America. Born to musician parents, Elisabeth has one younger brother. Her father Ron Moss, once a British national, was a jazz artist. Her mother Linda, who hailed partially from a Swedish ancestry, was a blues harmonica player.

Elisabeth Moss was brought up in the religious belief of Scientology by her parents. The show business background of her parents motivated her to become a performer since her childhood days. She made her acting debut at the age of six in the NBC TV miniseries ‘Lucky Chances’ in the year 1990. However, in spite of kickstarting an acting career so early in her life, Elisabeth was more inclined to pursue a career in professional dancing.

She studied ballet at the School of American Ballet in New York City. She traveled to Washington D.C. after that and studied with Suzanne Farrell at the Kennedy Center.

She carried on her dancing studies throughout her teenage years simultaneously appearing in acting roles as well. She started homeschooling under a private tutor to conduct her education and career in an organized manner and graduated in 1999 at the age of sixteen.

In 1999, Elisabeth Moss was cast as Polly, a teenage burn victim, in the film ‘Girl, Interrupted.’ Her compelling and realistic portrayal of the character in the movie made people go awestruck even including her co-stars of the likes of Whoopi Goldberg and the Oscar-winning legendary actress Angelina Jolie.

In the same year, she began to act in the recurring role of Zoey Bartlet, the youngest daughter of President Josiah Bartlet, on the NBC television series ‘The West Wing.’ The White House television drama concluded in 2006 turning Elisabeth into a household name in the United States. While ‘The West Wing’ was being telecast Elisabeth appeared in several other television as well as film projects.

In 1992, Elisabeth Moss was cast as Cynthia Parks in seven episodes of the TV series ‘Picket Fences.’ The series remained on air from 1992 to 1995. She lent her voice for the main character Holly DeCarlo in the TV special ‘Frosty Returns’ in 1992. In the following year, she again provided the voice of Michelle in the animated film ‘Once Upon a Forest’ (1993).

During the year 1993 and 1994, she appeared in two back to back films, ‘Gypsy’ (1993), a television remake and ‘Imaginary Crimes’ (1994). In 1995, she had the opportunity of acting in the remake of the Walt Disney Pictures film ‘Escape to Witch Mountain’ and also in the television film biopic ‘Love Can Build a Bridge.’ She also appeared in the drama ‘Separate Lives’ as a supporting actress and did a small role in the Black comedy ‘The Last Supper’ in the same year.

The most defining moment of Elisabeth Moss's career started when she played the recurring role of Peggy Olson, a secretary-turned-copywriter working in the New York - Madison Avenue-based advertising agency Sterling Cooper in the AMC period drama TV series ‘Mad Men’ (2007-2015).

The series was critically applauded and won some Golden Globes and Emmy Awards. Elisabeth also earned quite a handful of Emmy and Golden Globe Award nominations for her outstanding work on the show.

Immediately after landing the role of Peggy Olson, she made her maiden Broadway appearance in the 20th-anniversary resurrection of Speed-the-Plow by David Mamet in October 2008.

Her next venture was a comedy film titled ‘Did You Hear about the Morgans?’ (2009) And ‘Get Him to the Greek’ (2010) of the same genre. Her role of a detective in the 2013 miniseries ‘Top of the Lake’ earned her huge acclaim.

Elisabeth Moss also won a Golden Globe Award for her exploits in the show. She appeared in a Broadway show again in 2015. She starred as Heidi Holland in the play ‘The Heidi Chronicles’ and earned a Tony Award nomination for her performance.

She achieved another milestone in her distinguished acting career appearing as a surrogate mother in the Hulu series ‘The Handmaid's Tale’ in 2017. The performance earned her the Primetime Emmy Award for Outstanding Lead Actress in a Drama Series and some effusive critical acclaim as well.

Elisabeth Moss married Fred Armisen, an American actor-comedian, on October 25, 2009, after having met him in October 2008. The marriage was solemnized in Long Island, New York.

They subsequently filed for divorce in September 2010 after being separated in June 2010. They received the divorce decree on May 13, 2011.